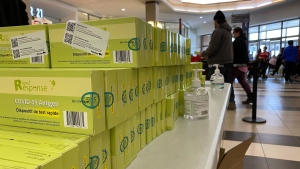 Ontario will continue to provide free COVID-19 rapid antigen tests until at least the end of the year, as new waves of the pandemic are expected to come every three months, according to the province’s top doctor.

“You will still find free tests in places such as grocery stores, pharmacies, as well as workplaces, schools, hospitals, retirement homes and long term care facilities. This will be continued and reassessed by the end of the year,” Moore said Wednesday morning.

Moore also announced that Ontarians aged 18 and over will be able to get a second booster dose against the virus starting tomorrow.

Ontarians have been able to pick up a box of free rapid tests at more than 2,400 participating locations since February.

The government has previously said that it is making about 5.5 million rapid tests available per week across the province.

He added that it appears the province is experiencing new waves of the pandemic every three months, as new variants of the virus continue to emerge.

“These waves appear to be coming on an every 90-day basis now, if you count between BA.1, BA.2 to BA.5 and it may be these undulating waves will have an untoward effect on the health-care system. We'll have to be prepared for those going forward,” he said.

Ontario is currently in a seventh wave of the pandemic.

The government says it has distributed more than 238 million free rapid tests since July 8, with 140 million going to highest risk settings, and over 98 million distributed through grocery and pharmacy retailers.