Limit the number of nursing and retirement homes staff can work in, RNAO urges 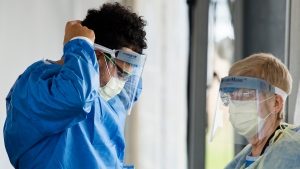 TORONTO - Health care workers should immediately be restricted to working for only one long-term care or retirement home to prevent the spread of COVID-19, the head of an association representing Ontario's registered nurses said Wednesday.

Doris Grinspun, the CEO of the Registered Nurses' Association of Ontario, said she has been “pleading” with provincial health officials to make the change for weeks as outbreaks continue to attack vulnerable seniors.

Grinspun said staff often work in multiple homes because they're unable to get full-time work, a practice that continues even during the pandemic.

Currently, workers in Ontario are encouraged, but not ordered, to work in only one long-term care or retirement home, she said.

“This is expanding like fire,” she said of COVID-19's spread in the province's senior's homes. “I don't see the firefighters coming ahead of it. We're letting the house burn and then we come in and we're trying to save some. This is more than a request, it's a plea.”

On Wednesday, a nursing home in Bobcaygeon, Ont., that has been the scene of the largest outbreak in the province announced that 28 of its residents have now died as result of COVID-19.

The province also reported outbreaks in 58 long-term care homes, with 464 COVID-19 case among residents and 78 deaths. The data also show 351 cases of the virus have been reported among staff in the facilities.

Grinspun stressed that health-care workers are not to blame for working in multiple homes, because years of low pay, lack of benefits and lack of full-time work have created the problem.

“They need to make a living. They work in two or three nursing homes,” she said.

She said the province must ensure staff work in one home only, and those who cannot be given full-time hours must receive wage enhancement in order to keep them from working in other places.

The province must also make surgical masks widely available to those same staff and conduct random testing for COVID-19 among residents to aggressively increase monitoring, she said.

The RNAO's requests came as Premier Doug Ford stressed he wants to see increased testing for staff and residents of long-term care homes.

“This is really about the fear of transmission,” she said. “I know there are a number of issues at play, but the reality is that if we allow this to happen and not monitor it closely we are just setting up for a serious problem.”

A spokeswoman for Long-Term Care Minister Merrilee Fullerton said the province has issued two emergency orders to help homes hire additional staff and provided $243 million in funding to speed up the process.

“We continue to monitor this constantly evolving situation and will continue to take action to keep our front-line heroes and residents in long-term care safe,” Gillian Sloggett said in a statement.

Late Wednesday, the Ministry of Health said the province's chief medical officer of health would be issuing a directive requiring all staff and essential visitors to long-term care homes to wear surgical masks. They will be required regardless of whether the home has an active outbreak or not.

Earlier this week, NDP Leader Andrea Horwath called on the Progressive Conservatives to restrict the number of homes health-care workers can be employed in during the crisis. She also said minimum wage for those workers should be bumped to $22 an hour to increase retention.

“The time to evaluate the underfunding and understaffing will come later, but the time to leap into action to save more residents has to come today,” Horwath said in a statement.

Ian Da Silva, director of human resources department of the Canadian Support Workers Association, said that group has been advocating for the need to recognize personal support workers.

Thousands have left the profession due to poor pay, lack of benefits and little job security, Da Silva said.

“There's been a shortage for years going into this crisis,” he said. “We're trying to bring in those that have left the field because there simply is no one there.”

Da Silva said making matters worse, the growing support worker shortage means companies are competing against each other for an ever-shrinking workforce.

“In a pandemic situation, especially when you're integrating quarantine periods into it, you need to separate staff that have been affected from staff that haven't,” he said. “During that isolation, the way it is right now, there is no one to replace them. There's nobody.”

“Systemic vulnerabilities have always made the long-term care sector vulnerable, but particularly vulnerable during a pandemic,” he said.

-with files from Colin Perkel.

This report by The Canadian Press was first published on April 8, 2020.