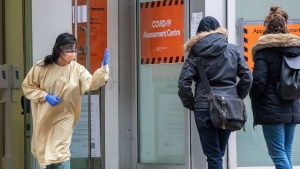 People are ushered in to a COVID19 testing centre at St. MichaelÕs Hospital in Toronto December 12, 2020. THE CANADIAN PRESS/Frank Gunn

Ontario is reporting more than 2,500 new cases of COVID-19 today and 23 more deaths, marking the highest daily case count reported in the province since late January.

Provincial health officials confirmed 2,557 new cases of the disease caused by the novel coronavirus today, up from 2,333 on Wednesday and 2,336 on Tuesday.

It is the highest daily case count recorded since January 22, when 2,662 new infections were logged.

With 62,290 tests processed over the past 24 hours, today's provincewide positivity rate is 4.8 per cent, according to the Ministry of Health. That is up from 3.8 per cent at this point last week.

Ontario is also reporting a big jump in the number of intensive care admissions today. According to the province's latest data, there are now 433 people with COVID-19 receiving treatment in Ontario ICUs, up from 396 on Wednesday and 332 one week ago.

For the first time in months, the province's ICU number is in line with what is being reported by Critical Care Services Ontario (CCSO).

The spike in cases and ICU admissions prompted a group of hundreds of Ontario doctors to issue a stern warning to the province today. The group sent out a written statement urging that tough public health measures be implemented now to prevent overwhelming ICUs any further.

"We cannot rely on the public health measures framework. It did not contain the less infectious, less deadly original variant in Wave 2 and it will not be enough to protect us from (variants of concern) in Wave 3," the statement read. "Immediate public health interventions are needed today in order to curb transmission and prevent further unnecessary deaths."

Sources confirm to CTV News that Premier Doug Ford is expected to announce a month-long provincewide shutdown today that will temporarily halt in-person dining at restaurants and close gyms and personal care services in all regions of Ontario. The shutdown is expected to begin on Saturday.

Another 55 cases of the B.1.1.7 variant, which is believed to be the dominant COVID-19 strain in the province, were confirmed today. Ontario now has a total of 1,952 confirmed cases of the variant, which was first discovered in the United Kingdom. More than 22,000 cases have screened positive for a variant of concern but are still awaiting whole genome sequencing to confirm lineage.

The province says 84,060 doses of a COVID-19 vaccine were administered in Ontario over the past 24 hours.

People are ushered in to a COVID19 testing centre at St. MichaelÕs Hospital in Toronto December 12, 2020. THE CANADIAN PRESS/Frank Gunn