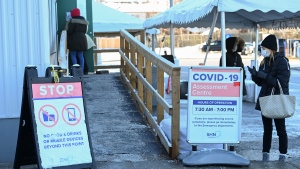 People line up at a COVID-19 assessment centre during the COVID-19 pandemic in Scarborough, Ont., on Wednesday, December 2, 2020. Toronto and Peel region continue to be in lockdown. THE CANADIAN PRESS/Nathan Denette

Ontario is reporting close to 3,000 new cases of COVID-19 as the province logs another 74 virus-related deaths over the past 24 hours.

Ontario health officials recorded 2,961 new cases of the disease caused by the novel coronavirus today, nearly 1,000 fewer than the record 3,945 cases confirmed on Jan. 10. It should be noted that just over 50,000 tests were completed over the past 24 hours, about 12,000 less than the number of tests reported on the day that record was set.

It is the second consecutive day that the province has reported fewer than 3,000 new cases.

An alarming 74 more virus-related deaths were reported in the province today, up from the 41 confirmed on Tuesday and 29 logged on Monday.

Thirty-six residents of Ontario long-term care homes are among the deaths reported today.

Since the start of the pandemic, 3,063 long-term care residents have died after contracting COVID-19 and approximately 40 per cent of Ontario's long-term care homes are dealing with an active outbreak of the disease.

The number of active cases in the province declined for the second day in a row, down about 500 to 29,636.

According to the latest data from the Ministry of Health, there are currently 1,674 COVID-19 patients at Ontario hospitals, down from 1,701 on Tuesday. The number of hospitalizations is still up significantly from last Wednesday, when 1,463 people infected with the virus were receiving treatment in hospital.

The ministry also says that the number of COVID-19 patients in intensive care units (ICU) remains unchanged today at 365, but recent data from Critical Care Services Ontario suggests that number is acutally above 400.

The provincewide positivity rate is now six per cent, according to the province. This is down from nearly eight per cent on Monday and Tuesday and 8.5 per cent one week ago.

On Tuesday, provincial health officials confirmed eight new cases of the much more transmissible B.1.1.7 coronavirus variant, which was first detected in the United Kingdom. There are now a total of 14 cases of the variant that have been identified in Ontario.

The variant, according to the province's latest modelling, poses a serious threat if there is widespread community transmission. Officials say the variant has the potential to reduce the doubling time for new cases in the province to just 10 days.

The stark new projections, which were released by the province’s science table on Tuesday, found that without a “significant reduction in contacts,” Ontario’s health system will be “overwhelmed” and deaths will surpass the first wave of the pandemic “before a vaccine has time to take effect.”

The modellers found that by early February, with three per cent case growth, the number of COVID-19 patients in intensive care units at Ontario hospitals could reach 1,000, approximately half of the province's total ICU capacity.

The modelling table also predicted that the average number of deaths per day could approach 100 by the end of next month. Ontario reported a record-high daily death toll of 89 on Jan. 7.

Epidemiologist Dr. Isaac Bogoch, who is a member of the province's COVID-19 vaccine task force, called the modelling data "sobering."

"You can really see what a tough spot we really are in. It really does translate not just into hospitalizations and ICU stays, but deaths, and a significant number of deaths," he said.

Bogoch said new restrictions announced by the province on Tuesday do have the potential to bring the number of new infections down in the province.

At a news conference on Tuesday afternoon, Premier Doug Ford announced a new round of public health measures aimed at curbing the widespread transmission of COVID-19.

The measures include slightly reduced operating hours for some non-essential businesses and the extension of mandatory online learning for students in the province’s hot spots.

The measures come into effect on Thursday at 12:01 a.m. and will remain in place for 28 days. The provincial government, which declared a second state of emergency on Tuesday, has also reduced the number of people who can gather outdoors from 10 to five.

A stay-at-home order was another component of the new provincial restrictions, forcing Ontario residents to only go out for essential purposes, including accessing health care, getting groceries, and exercising.

The Ford government has stated that police and bylaw officers will have the authority to ticket people for not following the stay-at-home order, however it remains unclear how enforceable the order will actually be.

Bogoch said any restrictions that limit the number of contacts people have with one another can help to reduce transmission.

"If this is truly adhered to, I think we will see a blunting of cases," he said.

*Numbers included in this story came from data released by Ontario's Ministry of Health at 10:30 a.m.

People line up at a COVID-19 assessment centre during the COVID-19 pandemic in Scarborough, Ont., on Wednesday, December 2, 2020. Toronto and Peel region continue to be in lockdown. THE CANADIAN PRESS/Nathan Denette