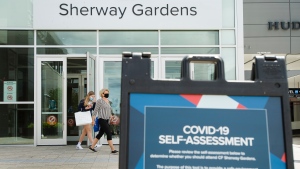 Ontario health officials reported 154 new cases of COVID-19 on Monday and no new deaths, the first day since late March where no fatalities were reported.

Monday’s count is higher than 138 on Sunday, and 121 cases on Saturday.

The province last reported no deaths in a 24-hour span on March 28.

“It is great that we have zero (deaths) reported today but that doesn’t mean we will continue to have zero. Hopefully the numbers will stay low, though,” Ontario’s Associate Medical Officer of Health Dr. Barbara Yaffe said during a briefing at Queen’s Park on Monday afternoon. “We have less people in hospitals and less people on ventilators so the signs are that we are having less and less cases, less severe cases and hopefully less deaths.”

Provincial labs turned around 17,300 test specimens in the past 24 hours, representing a positivity rate of 0.89 per cent.

Another 8,900 test specimens remained under investigation on Monday.

Officials said 160 patients recovered from infection in the past day.

There are now 1,833 active cases remaining in the province, along with 2,689 centrally-confirmed deaths and 31,426 recovered patients.

Meanwhile, Ontario’s hospital occupancy due to COVID-19 continues to fall.

There were 118 people in hospitals receiving treatment for COVID-19 symptoms on Monday, down from more than 1,000 in mid-April.

Of those, 36 were in intensive care, and 21 of the ICU patients were intubated.

Speaking with reporters during Monday’s press conference, Ontario’s Chief Medical Officer of Health Dr, David Williams said that they hope is that Ontario may be entering a new phase in the pandemic that is more focused on the containment of outbreaks, rather than limiting community spread.

“We have had nearly two weeks of under 200 (cases per day) except for certain days and when we have seen that it has been a cluster around an outbreak and that has been interesting to see,” he said. “Are our numbers evidence of spread in the community or are we now getting to a containment phase where most of the health units are looking at a cluster here or a cluster there and you may have no new cases for a day or two and then all of a sudden you find a cluster like Kingston and you go up to 25 or 30 and then back down to zero again?”