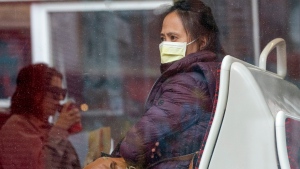 Ontario officials are now recommending that anyone travelling on public transit use a face covering to help limit the spread of COVID-19.

Minister of Transportation Caroline Mulroney made the recommendation during a press conference at Queen’s Park on Wednesday, though she said that anyone under the age of two or with a respiratory condition would be exempted, as will anyone who is not capable of removing the face covering themselves.

She said that her government is also working on a “clear set of guidelines” for public transit agencies as the economy begins to reopen and transit ridership presumably begins to rise back to more normal levels.

Those guidelines, she said, will include a request that transit agencies admit fewer passengers, ensure the availability of hand sanitizer as passengers enter and exit vehicles and set up plexiglass barriers between riders and operators.

The TTC has previously said that its ridership is down about 90 per cent since the beginning of the pandemic, though there is a thought that more people will be taking public transit in the wake of retail stores being permitted to reopen on Tuesday.

“If you are going out for necessities or if you are taking public transit and you can't keep two metres apart, we recommend that you wear a non-medical mask or a face covering,” Premier Doug Ford said at Wednesday’s news conference. “As the chief medical officer has said, anything that covers your nose and mouth can help protect you and people around you."

Federal public health officials have previously said that people should wear non-medical face coverings whenever they are in public and don’t believe that they will be able to maintain a distance of two metres from other people, though the province had not explicitly made that recommendation itself.

On Wednesday they did issue that advice, taking the additional step of saying that all public transit riders should also wear masks.

“(Chief Medical Officer of Health) Dr. (David) Williams has always said that wearing a mask doesn’t necessarily protect you from COVID-19, but it will protect others from you and so previously it wasn’t necessary because we were asking people to stay home, stay inside, only go outside if absolutely necessary to get food or get medicine,” Health Minister Christine Elliott said when asked why her government hadn’t previously made the recommendation. “The situation has changed now with the reopening somewhat of the economy and more people will be outdoors and there may be situations where they can’t maintain the physical distancing, which continues to be the golden rule.”