Toronto to extend prohibition on indoor dining at bars and restaurants, order continued closure of casinos and meeting spaces 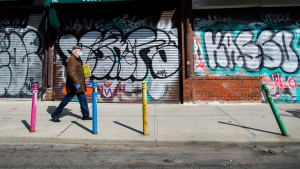 Canadian small business struggling during the COVID-19 pandemic will likely incur $117 billion in debt collectively that could take more than a year to pay off, according to a new study. A lone person walks the empty streets in Kensington Market in Toronto on Wednesday, April 15, 2020. THE CANADIAN PRESS/Nathan Denette

Indoor dining will not resume at Toronto bars and restaurants this weekend as planned and a number of other businesses, including meeting spaces, movie theatres and casinos, will be ordered to remain closed amid the recent rise in COVID-19 cases.

The additional restrictions were announced by Medical Officer of Health Dr. Eileen de Villa during a briefing at city hall on Tuesday afternoon.

She said that as of 12:01 a.m. on Saturday the city will formally be moved into the “red” zone in the province’s tiered framework but will face a number of additional restrictions that she is issuing under Section 22 of the Health Protection and Promotion Act.

Those restrictions include the prohibition of all indoor dining at bars and restaurants as well as all indoor group fitness and exercise classes for at least the next 28 days.

De Villa said that she will also use her powers to require the continued closure of meeting and event spaces, casinos, bingo halls and other gaming establishments.

Gyms that have been shuttered since last month will be allowed to reopen but will be required to adhere to a capacity limit of 10 people or less, as per the restrictions outlined by the province for red zones.

Movie theatres, meanwhile, will be required to remain closed as they are not permitted to operate in red zones.

“I recognize that these actions will have economic impacts and I am truly sorry for this. I really am. However, in my professional opinion the greatest harm would be to allow COVID-19 to continue to spread at this rate,” De Villa said. “It is logical to assume that it will only get worse and it is logical to believe that if we effectively reduce the spread the economy will benefit in the long run. But if action is not taken we can expect to see even more cases of COVID-19 which means more illness and more deaths.”

Premier Doug Ford announced last week that Toronto would be moved into the orange level in the province’s tiered framework as of Nov. 14, allowing most businesses to reopen and indoor dining to resume with additional restrictions.

De Villa, however, said on Tuesday that a recent acceleration in new cases has led her to believe that now is not the time to pursue a wider reopening strategy.

She said that Toronto has seen nearly 2,000 new cases over the last four days, including a record 533 over the last 24 hours (The province uses a slightly different time frame for reporting cases and therefore logged a slightly lower but still alarming number of 520 cases for Toronto Tuesday).

Its positivity rate has also risen to 5.9 per cent, she said.

“To everyone in Toronto I want to tell you in the plainest possible terms that COVID-19 is out there at levels we have not seen before,” she said. “You should assume it is everywhere and that without proper precautions and protections you are at risk of infection.”

Back in October De Villa publicly called on the province to prohibit indoor dining at bars and restaurants but refused to issue the order herself as the province considered the request, citing a legal opinion which cast doubt on whether she had the power.

On Tuesday, she said that the legal advice she received back then has not changed but the urgency of the situation has.

“Our situation is incredibly urgent. The risk is very, very high and extreme situations sometimes call for extreme actions and we needed strong decisive action,” she said.

In addition to the restrictions that De Villa is issuing under the Health Protection and Promotion Act, she is also recommending that social gatherings be restricted to household members and essential supports only and that residents limit their outings outside the home to “essential activities only.”

Speaking with reporters at Tuesday’s press conference, Mayor John Tory said that the various measures and recommendations being made by De Villa amount to “a pre-emptive strike to avoid giving up all the progress we had made confronting the virus.”

“I know she doesn’t make these recommendations lightly and I don’t support them lightly,” he said.

While Toronto will not be imposing any further restrictions on religious gatherings, Tory said he'll be reaching out to faith leaders to encourage them to hold virtual gatherings for the time being.

Later Tuesday, the city posted a full list of restrictions that will take effect on Nov. 14.

Canadian small business struggling during the COVID-19 pandemic will likely incur $117 billion in debt collectively that could take more than a year to pay off, according to a new study. A lone person walks the empty streets in Kensington Market in Toronto on Wednesday, April 15, 2020. THE CANADIAN PRESS/Nathan Denette