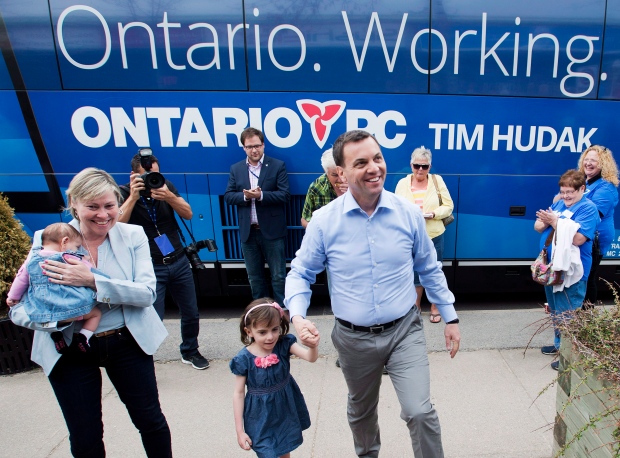 Ontario PC leader Tim Hudak, right, with his family arrive to greet supporters at his headquarters during a campaign stop in Grimsby, Ont., on Monday, May 12, 2014. THE CANADIAN PRESS/Nathan Denette

PC Leader Tim Hudak may be leading the pack in the race to become premier, but a new poll from Ipsos-Reid shows that the majority of Ontarians don’t believe he will follow through on his promise to create one million jobs if elected.

Hudak has made job creation the central issue of his campaign, repeatedly touting his “Million Jobs” plan as the only way to improve the province’s fortunes.

The message doesn’t appear to be catching on with voters, though, with 67 per cent of respondents saying they don’t see the plan as credible compared to the 33 per cent who do.

Even among Tory supporters, the plan wasn’t universally beloved.

Meanwhile, Hudak’s pledge to cut 100,000 jobs from the public sector is also proving to be decidedly unpopular with 61 per cent of respondents saying they oppose the job cuts and just 39 per cent voicing their support for them.

The poll of 800 Ontarians was conducted on May 20th and 21st on behalf of CP24/CTV News and follows the release of another poll on Thursday, which gave the PCs (35 per cent of decided voters) a slight lead over the Liberals (31 per cent) and the NDP (28 per cent).

While the Tories have put themselves forward as the only party suited to guide the province through challenging economic times, the poll released Friday also found that voters are split on who has the best ideas on how to improve the economy with 29 per cent of respondents saying Hudak and the Tories, 28 per cent saying Kathleen Wynne and the Liberals, 26 per cent saying Andrea Horwath and the New Democrats and 18 per cent saying some other party.

"The Tories usually are quite high on their positioning on the economy but here all three parties are sort of lined up the same. It's not having a lot of impact on people who are going to vote for the Tories, though," John Wright, senior vice-president of Ipsos Public Affairs, told CP24 on Friday. "The simple reason is this: over the last couple of months we have found that about 73 per cent of the people in the province really want change."

The poll is considered accurate to within 3.9 percentage points.