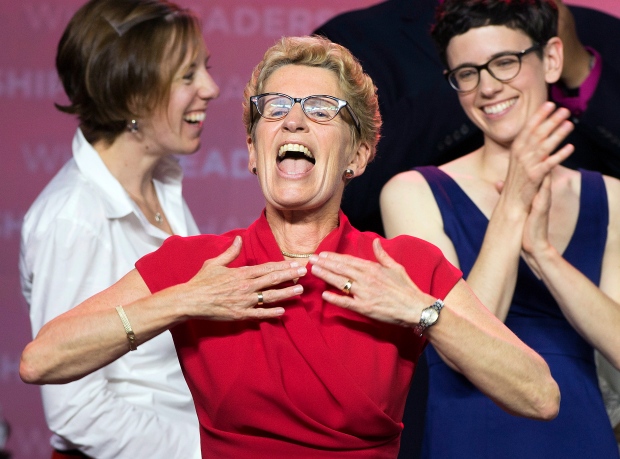 Ontario Premier Kathleen Wynne celebrates on stage with her family after winning the provincial election in Toronto on Thursday June 12, 2014. (Frank Gunn /The Canadian Press)

TORONTO -- Ontario's Liberals have won a majority government in the provincial election. Premier Kathleen Wynne has promised to reintroduce the Liberal budget -- which failed to get the support of the opposition parties last month, triggering the election -- within 20 days.

Here are some highlights from the Liberal fiscal plan:

-- create a 10-year $2.5 billion Jobs and Prosperity Fund to partner with industries poised for growth. Measures include $10 million for a nine-month paid community work and service program to help graduating high school students, and $5 million in grants for the next two years for new small-scale manufacturers.

-- invest $15 billion in transit projects in the Greater Toronto and Hamilton area, including the electrification of GO Transit commuter trains and a downtown Toronto subway relief line.

-- invest $14 billion in roads, bridges, highways and other transit projects outside the GTHA, including $1 billion to support the development of the Ring of Fire in northern Ontario, with or without financial help from the Harper government.

-- provide up to $230 million to expand access to natural gas in under-served communities, including agricultural communities.

-- create an Ontario retirement pension plan which could be integrated into a CPP expansion in the future.

-- guarantee that every Ontarian has access to a primary care provider.

-- continue to expand the scope of practice for nurses and pharmacists.

-- improve math scores and help kids be more active through 60 minutes of physical activity connected to their school day.

-- continue the 30 per cent off tuition grant for post secondary education.

-- increase the number of apprentices training in Ontario.