TORONTO -- Schools threatened with closure due to dropping enrolment should be saved and upgraded for community use, NDP Leader Andrea Horwath said Saturday as she promised millions to revamp aging and under-utilized facilities.

A New Democrat government would earmark $60 million annually to maintain and renovate schools on the chopping block so they could continue to operate, while allowing non-profit and community groups to take advantage of unused space, Horwath said.

Some buildings could be repurposed altogether if that's what best serves residents, she said.

"People have already paid for that infrastructure. They've paid for those facilities to exist. They've become the fabric, frankly, of communities," Horwath said at an early morning news conference in Toronto.

"Both (Progressive) Conservatives and Liberals have left school boards with no choices but to shut down schools and tear them out of the communities and people have been telling me across this province that that's not what they want to see."

Horwath's program would protect schools "at the heart of our communities" and ensure access to affordable after-school and weekend activities, she said, adding school boards could apply for funding starting in 2016.

The plan is meant as an "interim measure" while the party reviews the province's education system, which Horwath said is "set up to fail" the communities it serves.

She would not, however, commit to whether she would revert to the previous funding formula that took into account the number of schools per board, nor would she say whether she would allow boards to raise their own taxes.

Some 125 schools were facing or recommended for closure between 2012 and next year, while another 142 are under review, the NDP said.

A recent report by the Ministry of Education found enrolment was declining in 53 of the province's 72 school boards, and pointed to sharing space as a possible strategy to use infrastructure more efficiently.

The Liberals have not yet released an education policy but Education Minister Liz Sandals said the NDP proposal "pales in comparison" to the investments laid out in the party's spring budget.

She accused Horwath in a statement of putting "her own political interests first" by opposing the budget, which included $11 billion to build or repair schools.

The Tories, meanwhile, have vowed to eliminate 9,700 "non-teaching positions," increase class sizes -- which could mean laying off teachers -- and reduce the number of early childhood educators in full-day kindergarten classes as part of their effort to balance the books.

Deputy leader Christine Elliott questioned the feasibility of the NDP plan at a campaign stop in Whitby, east of Toronto.

"What we need to do is make sure that we can afford all of these things. We have to cost this out. It isn't a limitless budget," she said.

"We have costed out our plan. We know that it's affordable. We can't continue to spend beyond our means. We need to get our debt and our deficit under control before we spend more money."

Horwath, who pledged to release a full campaign platform within a week, also found herself in the hot seat Saturday over her expenses.

The Liberals issued a release accusing the NDP leader of billing taxpayers for thousands of dollars in personal expenses -- including muffins, taxi rides and a $0.25 parking fee -- even as she criticized others for doing the same.

Horwath defended her actions, saying she spends a lot of time on the road and clears her expenses with the integrity commissioner before submitting them. 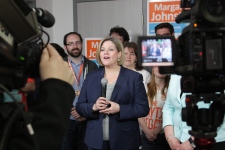 NDP Leader Andrea Horwath speaks during an election rally in Kitchener, Ont, on Friday, May 16, 2014. THE CANADIAN PRESS/Colin Perkel