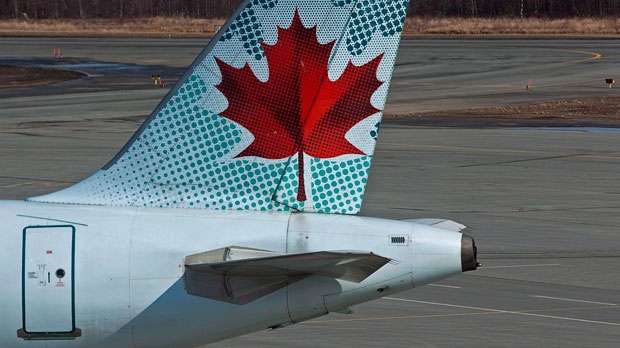 An Air Canada plane is seen in this file photo. (The Canadian Press/Andrew Vaughan)

MONTREAL -- Air Canada reached an early and unprecedented 10-year tentative agreement Monday with the union representing 3,000 of its pilots.

Details of the deal were not released, pending approval by the airline's board of directors and ratification by the union in about three weeks.

"Every year of the deal, we've got improvements," Capt. Craig Blandford said. "We believe this is a significant investment in our future and provides Air Canada the stability to grow and hopefully this will provide confidence in the financial markets to see that this airline is on the right path."

He said pilots bought into the airline's growth plans by providing it with increased flexibility to add airplanes and different types of aircraft at the mainline and Rouge low-cost carrier. More regional aircraft would also be permitted to provide connecting traffic to a larger Air Canada fleet.

Talks had began in June after the airline approached the union to renew a five-year retroactive contract imposed by an arbitrator in 2012. The contract was set to expire in April 2016.

Blandford said the union recognized that Rouge, which was launched in July 2013, is necessary to compete in the leisure market and for the financial success of Air Canada. He said the biggest change in the new contract was to the language used to determine the size and type of airplanes Air Canada pilots can fly.

Benjamin Smith, president of Air Canada passenger airlines described the agreement as an important development for the Montreal-based carrier, which has been restructuring its operations to generate sustainable profits.

It "will allow us to further accelerate the implementation of our business strategy and support long term profitable growth for the benefit of Air Canada and our pilots," he said in a statement.

Air Canada's last round of labour talks were among the most acrimonious in its history. They included a 12-hour illegal walkout by baggage handlers and ground staff that disrupted flights, the tabling of a back-to-work bill in Parliament and a final-offer selection in which an arbitrator sided with the airline.

Industry analysts said the deal with pilots bodes well for negotiations with other Air Canada unions that are set to begin in the new year.

Chris Murray of AltaCorp Capital said the agreement greatly reduces the risk of another impasse.

"We also believe an agreement by the pilots is constructive towards having other labour groups, including customer service agents, mechanics and ramp staff and flight attendants reach agreements, some that expire in the first half of 2015," he wrote in a report.

But David Tyerman of Canaccord Genuity noted that pilots had rejected an early tentative agreement reached in the last round of negotiations.

The pilots union said it has taken steps to avoid a repeat of the 2011 contract rejection by polling members about what they want and updating them frequently during the labour talks.

Meanwhile, the union representing call centre and airport workers said it was surprised by the deal with the pilots.

"We will not be signing a 10-year agreement with Air Canada now or ever," said Leslie Dias, national representative for 3,900 airline members of Unifor, whose five-year contract expires in February.

Dias said the circumstances are different for each union.

"We're sitting today with a pay scale (where) the minimum wage is almost the same as the starting wage," she said, noting that salaries range between $23,000 and $53,000, well short of pilots.

On the Toronto Stock Exchange, Air Canada's shares closed up 31 cents or nearly four per cent to $8.18 in Monday trading.