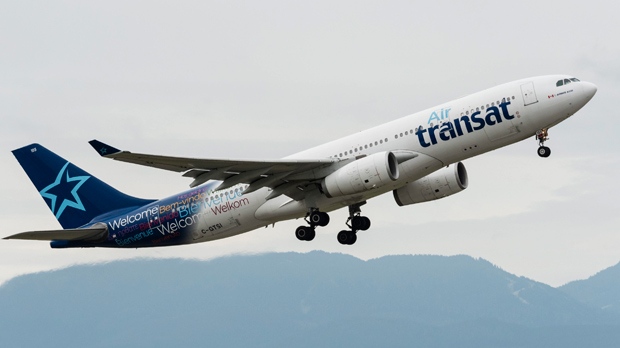 This file photo shows an Air Transat Airbus A330 (A330-200) jet airliner taking off from Vancouver International Airport, May 21, 2016. THE CANADIAN PRESS IMAGES/Bayne Stanley

MONTREAL -- Air Canada's interest in buying rival Transat AT Inc. for about $520 million got positive feedback from industry watchers and stock traders after the two companies announced Thursday that they're in exclusive talks to finalize a deal.

After three hours of trading Thursday, Transat shares rose about 15 per cent to $12.17 while Air Canada stock gained four per cent to $40.54, which is above the previous all-time high set Wednesday at $39.16.

McGill University professor Karl Moore said a combination of the two companies would help grow Air Canada Vacations, which competes with Transat, WestJet and others in the leisure travel market.

"Air Canada's plan is to grow and this is part of their growth strategy," Moore said in an interview.

"And I think Transat is going to be in better shape because of the potential of being bought by Air Canada."

A deal that keeps Transat's head office in Montreal would also be greeted favourably by politicians in Quebec, just as Alberta politicians said they want to see WestJet headquarters remain in Calgary if it's bought by Onex, Moore said.

Toronto-based Onex Corp. announced Monday that it has a friendly deal to buy WestJet Airlines Ltd. -- Canada's second-largest airline company -- for about $3.5 billion, subject to approvals.

Moore said the level of competition that Air Canada faces from WestJet will increase with the financial resources of Onex.

"Who knows for sure, but my sense is that I'd be astonished if (that) deal doesn't get approval and go forward," Moore said.

Analyst Walter Spracklin of RBC Dominion Securities writes in a note to clients that there are a number of factors that would justify a premium price for Transat stock.

For another, the addition of Transat will provide Air Canada Vacations with a broader reach.

Additionally, Spracklin said that access to Transat's fleet -- and its in-place order for Airbus A321 passenger jets -- would help Air Canada strengthen its Rouge discount brand.

"From a price paid, the multiple is on the higher end, reflecting the take-out premium; however justified by the strategic merits above," Spracklin concluded.

"The acquisition presents a unique opportunity to compete with the very best in the world when it comes to leisure travel," Rovinescu said in a statement.

Transat chief executive Jean-Marc Eustache said earlier Thursday that an Air Canada deal represents the best prospect for maintaining or growing the number of jobs that Transat has been developing in Quebec and elsewhere.

In Quebec City, Premier Francois Legault said news of the transaction with Air Canada brought back a flood of good memories, like watching the first ever Transat flight in Mirabel with other airline employees with tears in his eyes.

"It tugs at the heart strings when I see Air Canada, our competitor, is buying Air Transat," said Legault, a co-founder of the airline. "But it's good news that it's Air Canada because their head office is in Montreal and what I said from the beginning is I wanted to ensure the head office stays in Quebec."

Transat offers vacation packages, hotel stays and air travel under the Transat and Air Transat brands, with a primary focus on the transatlantic market during the summer and sun destinations through the winter.

Transat first disclosed that it had held preliminary talks regarding the possible sale of the company last month, but did not name the potential bidders at that time.

-- by David Paddon in Toronto