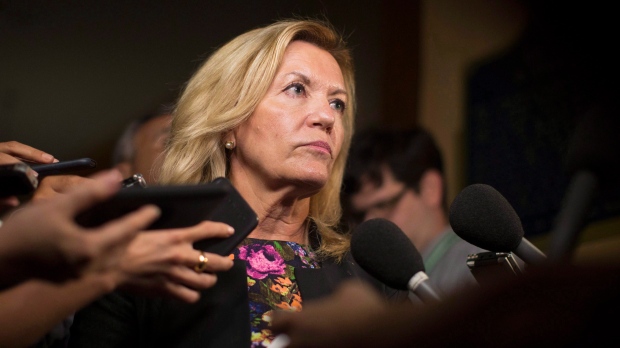 TORONTO -- An ad campaign from a group of open vaccine skeptics that briefly dotted some streets in the Toronto area represents a "very concerning" development in the ongoing fight against misinformation, Ontario's health minister said Wednesday.

Christine Elliott expressed fundamental disagreement with the billboard ads paid for by Vaccination Choice Canada, an advocacy group that describes its mandate as ensuring people are fully informed and educated about immunizations for themselves and their children.

The campaign, which rolled out across more than 50 digital billboards around the city last week but appeared to have been taken down ahead of schedule on Wednesday, featured a rotation of four slogans and direct questions that a group spokesman said aimed to ensure that Canadians are "truly informed" when they consent to getting vaccinated.

The group's vice-president, Ted Kuntz, said the company responsible for disseminating the campaign faced pressure from an "unknown" source to remove the ads, saying the move suggests Ontario's public policy does not support public education.

Elliott disagreed, lamenting the amount of public misinformation on medical subjects, redoubling calls for Ontario residents to get their vaccines and suggesting failure to do so has already had consequences.

"A certain number of people need to be vaccinated in order for it to be effective," Elliott said after directly criticizing the Toronto-targeted campaign. "It's not necessarily happening now, and we're seeing things come forward like tuberculosis outbreaks in certain parts of Ontario, measles outbreaks and so on. So we are going to continue, through the Ministry of Health, to encourage people to have their children vaccinated and to receive regular inoculations themselves."

Elliott did not offer details on which parts of the province she was referring to.

The billboards at the heart of the campaign are meant to encourage parents to do research before proceeding with immunizations, Kuntz said, adding the group commonly described as "antivaxxers" are in fact former vaccine supporters who have grown "risk-aware" through their own research and experience.

The messages in circulation as part of the campaign were meant to raise questions and spur discussion and deeper research, said Kuntz, who describes himself as the parent of a now-deceased child injured by a vaccine in infancy.

Half the campaign's messages posed the questions "What are the risks?" and "How many is too many?" The other two came in the form of statements -- "Educate before you vaccinate" and "No shots, no school? Not true."

Dr. Vinita Dubey, associate medical officer of health at Toronto Public Health, described the messages at the core of the campaign as "half-truths."

Dubey agreed that over-vaccinating children is dangerous, for instance, but said current immunization protocols are safe, evidence-tested and effective in protecting both individuals and broader populations.

She said the same held true for the message challenging vaccination policies in schools. Ontario parents are required to provide vaccination certificates for their children, she said, but noted they also have the option to obtain an exemption for their kids based on medical, religious or philosophical grounds.

"They misrepresent information on vaccines," Dubey said of the billboards. "This is a common tactic that the anti-vaccine movement uses to try and change people's opinion on vaccines, and that is our biggest concern."

"A parent can't decide what is best for oneself and one's children without adequate information about the benefits and risks. Good products, backed by solid evidence of safety and effectiveness, are not afraid of educated and informed parents," he said.

The Public Health Agency of Canada said in a statement that Canadian parents "rightly have questions about vaccines," but that the science on the topic is unequivocal.

"Vaccines can prevent infectious diseases that once killed or harmed many infants, children and adults," spokeswoman Anna Maddison said.

"However, there is a small but vocal anti-vaccination community that spreads false information. They use powerful emotional images and misinformation with their message. This creates confusion and fear for parents who are trying to make the best decisions for the health and wellbeing of their children."

Timothy Caulfield, a Canada Research Chair in health law and policy at the University of Alberta, said the number of people who are staunchly opposed to vaccines form a very small minority. Their messaging, however, finds an increasingly receptive ear among the 20 to 30 per cent of Canadians who express "vaccine hesitancy," he said.

Caulfield said science has unequivocally settled the debate, describing a "mountain of evidence" on the pro-vaccination side compared to a "small mound" fuelling the skeptics' arguments.

But he said anti-vaccination messaging is reaching a wider audience, thanks to both social media and broader political forces that have roiled countries around the world.

"The profile of the 'antivax' movement, I think, is connected to this rise in populism and this growing distrust of experts ... and our institutions," Caulfield said. "That gives space to these kinds of views and allows them to flourish."