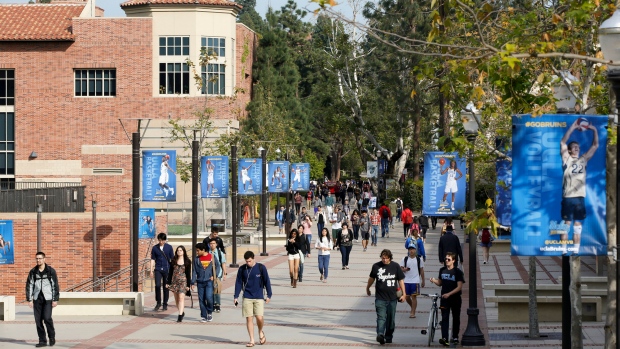 In this Feb. 26, 2015, file photo, students walk on the University of California, Los Angeles campus. Xiaoning Sui, 48, of Surrey, British Columbia, is accused of paying $400,000 to get her son into the University of California, Los Angeles, as a fake soccer recruit. She has become the 52nd person charged in a sweeping college admissions bribery scheme, according to an indictment unsealed Tuesday, Sept. 17, 2019, in Boston's federal court. (AP Photo/Damian Dovarganes, File)

BOSTON - A woman accused of paying $400,000 to get her son into the University of California, Los Angeles, as a fake soccer recruit has become the 52nd person charged in a sweeping college admissions bribery scheme, according to an indictment unsealed Tuesday.

Xiaoning Sui, 48, of Surrey, B.C., was charged with a single count of conspiracy and fraud in the indictment unsealed in Boston's federal court. Authorities say she was arrested in Spain on Monday night and was being held there while they seek to extradite her to the United States.

Sui is the first person to be charged since June, when parent Jeffrey Bizzack pleaded guilty to paying $250,000 to get his son into the University of Southern California as a fake athlete. Dozens of others were charged in March when authorities announced the investigation.

It was not immediately clear whether Sui had an attorney to speak for her.

She is the second person from B.C. to be charged in the investigation.

Prosecutors say Sui paid $400,000 to a sham charity operated by admissions consultant William “Rick” Singer as part of an alleged scheme to have her son admitted to UCLA as a fake soccer recruit. Sui is accused of providing Singer her son's transcript and photos of him playing tennis.

Singer worked with Laura Janke, a former assistant soccer coach at USC, to fabricate an athletic profile depicting Sui's son as a top player on two private soccer clubs in Canada, prosecutors said. Both Singer and Janke have pleaded guilty.

Sui's son was admitted to UCLA as a soccer player in November 2018, authorities say, and was awarded a 25 per cent scholarship.

The case was outlined in a March indictment against former UCLA soccer coach Jorge Salcedo that didn't identify Sui by name. The document said only that Salcedo accepted $200,000 to help two of Singer's clients get their children admitted as soccer recruits, including one in October 2018. Salcedo has pleaded not guilty.

A statement from UCLA says it took “immediate corrective action” after the March indictment was released. The school said privacy laws prevent it from discussing specific cases, but officials are “not aware of any currently enrolled student-athletes who are under suspicion” by the Justice Department.

The alleged bribe ranks among the highest in the scheme. Some other parents are accused of making payments of up to $500,000, and some pursued the scheme multiple times, prosecutors say, with payments totalling up to $1.2 million.

Prosecutors did not explain why Sui was not part of the original group of parents charged. Court documents show Sui's indictment was filed in March but remained under seal until Tuesday.

In April, a Vancouver businessman pleaded not guilty to a charge of conspiracy to commit money laundering after he was charged in the investigation.

David Sidoo's lawyer, Richard Schoenfeld, said at the time the plea was entered in writing after an indictment from the U.S. District Court in Massachusetts accused him of wiring about $100,000 in January 2013 from an account in Canada to an account in California.

The indictment alleges the money was in the name of college-prep company The Key, and meant to be in exchange for admissions consultant's facilitation of an alleged SAT cheating scheme for Sidoo's younger son.

Sidoo, a former Canadian Football League player and well-known philanthropist, had already pleaded not guilty to conspiracy to commit mail and wire fraud.

An indictment in March alleged Sidoo paid $200,000 in total for someone to take the SAT on behalf of both his sons, and that he also paid an undisclosed amount for someone to fly to Vancouver and take a high school graduation exam on behalf of his older son.

The scandal has ensnared dozens of wealthy parents accused of paying bribes to rig their children's SAT and ACT scores or get them admitted as recruited athletes to elite schools across the nation, including Yale, Stanford and Georgetown universities.

Of the 51 people previously charged, 23 have pleaded guilty, including “Desperate Housewives” star Felicity Huffman, who paid $15,000 to rig her daughter's SAT score. She was sentenced last week to 14 days in prison, 250 hours of community service and a $30,000 fine.

Another 28 defendants are contesting the charges against them, including “Full House” actress Lori Loughlin and her fashion designer husband, Mossimo Giannulli, who are accused of paying to get their two daughters into USC as fake athletes on the crew team.