A baby monkey who amused surprised shoppers inside a North York Ikea store over the weekend has arrived at his new home in a primate sanctuary north of Toronto.

The monkey, whose name is Darwin, will now live at the Story Book Farm Sanctuary in Sunderland, Ont. He animal made international headlines after he found himself inside the Ikea store on Provost Drive Sunday afternoon.

According to Toronto Animal Services, Darwin was locked up in a crate inside a car parked in the parking lot of the store. The monkey let himself out and made his way inside the store.

A video sent to CP24 by a viewer shows the monkey jumping up and holding on to a door latch, walking back and forth through the store as shoppers scrambled to take photos of him. The animal appeared calm and non-aggressive as it walked through  a section of the busy furniture store.

Mary Lou Leiher, an official with Toronto Animal Services, said the monkey’s owner was fined $240 for having the pet in the first place.

“This is why we have a bylaw against keeping prohibited animals in the city,” she told reporters at a news conference Monday morning.

She warned that this type of monkey --  identified as a Rhesus macaque -- could carry strains of Herpes B which is without symptoms but could be transferred to humans.

Darwin – who was born in Montreal – appears to be in good health, she said, though he was stressed from being away from his owner, she said.

“We are cognizant of that and we are making sure he can get to a place where they can care for him properly.”

Until then, officials with Toronto Animal Services are doing their best to put the monkey at ease after his ordeal, feeding him fruit and other foods.

“When I saw him he was very quiet, at the front of his cage. Hopefully that’s a good sign,” said Leiher. “It’s a stressful time for him, he doesn’t know anybody.  He’s a young monkey.”

Darwin, whose appearance at Ikea made him a social media sensation, is keeping away from the spotlight for now.

The monkey is not doing any media appearances, despite requests from CP24, U.S. anchor Anderson Cooper and other news outlets around the world. 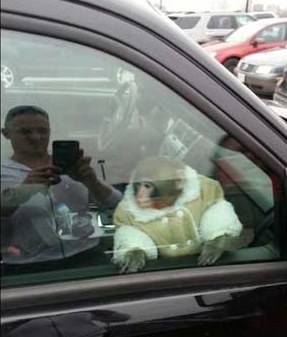 Darwin, better known as the Ikea monkey, is photographed from his new home at the Story Book Farm Primate Sanctuary. (Tom Podolec/CP24)

A small monkey wearing a winter coat and a diaper exits an IKEA in Toronto on Sunday, Dec. 9, 2012. (The Canadian Press/Bronwyn Page)