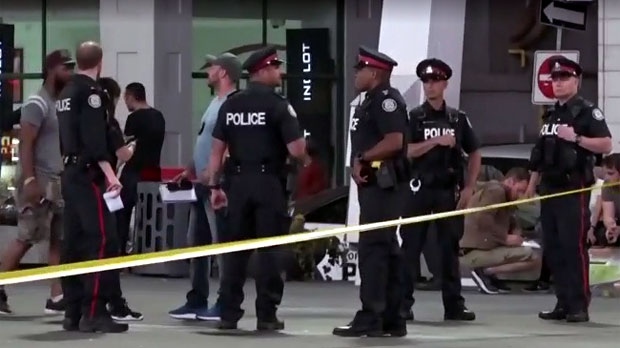 Toronto police officers are seen investigating after a fatal shooting took place at Yonge-Dundas Square on May 30, 2018.

A 17-year-old boy has been charged in connection with the fatal shooting of an 18-year-old man in Yonge-Dundas Square back in May.

Gunfire rang out just after 11 p.m. at the busy downtown square, located at Yonge and Dundas streets, on May 30.

Officers arrived at the scene and located a male victim suffering from life-threatening gunshot wounds. He was subsequently taken to a local trauma centre where he was pronounced deceased.

The young man was later identified as Pickering-resident Israel Edwards.

On Thursday, officers made an arrest in the investigation.

A 17-year-old boy, who cannot be identified as per the terms of the Youth Criminal Justice Act, has been charged with second degree murder, attempted murder and possession of a restricted firearm.

The teenager was scheduled to appear in court on Friday.

Israel Edwards, 18, is seen in this undated photo provided by Toronto Police Services.