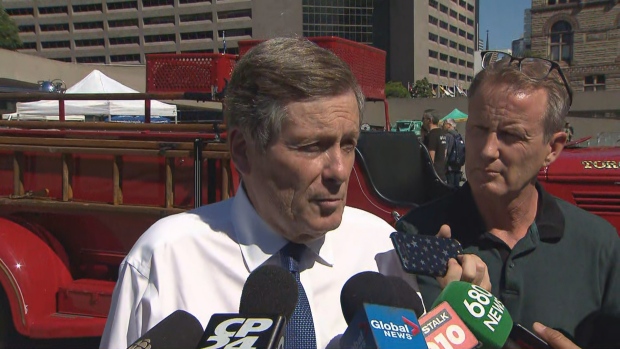 Brampton Mayor Patrick Brown’s suggestion that “416 gang activity” is to blame for the violence in his city is “not constructive” and largely ignores the fact that street violence has become a “regional problem,” Mayor John Tory says.

Tory made the comment to reporters on Tuesday afternoon in the wake of Brown taking to Twitter following a fatal shooting on Highway 410 to say that he is “sick and tired of 416 gang activity spilling over into Peel Region.”

“I think that kind of talk about where this all arises from or who is to blame is not very constructive,” Tory said. “These are tragedies that affect families and neighbourhoods. They happen in different parts of the region. It is regional problem and it will require a regional solution in the sense of all the governments working together.”

On Monday, Brown said that the fatal shooting on Highway 410 served as “another reminder that gang activity doesn’t respect postal codes” and underscores the need for his city to receive funding to fight guns and gangs, as Toronto has.

In August, both the federal and provincial governments contributed $1.5 million each to fighting gun violence in the City of Toronto following a spike in shootings.

The federal government has also previously announced $54 million in funding to the Province of Ontario to be used for initiatives aimed at reducing gun and gang crime.

“My understanding is that there is provincial money right now that exists so people in other communities besides Toronto can apply for those funds and I would certainly be very supportive of the Region of Peel, Brampton and Mississauga getting money that will help them fight guns and gangs,” Tory said. “That is the approach I would rather take, working with them and supporting them in their applications to the province and then working with them to combat these people who seem to feel free to put guns in their pockets, then use them for what seem to be the most trivial of reasons.”

In a series of messages posted to Twitter on Tuesday night, Brown said that he appreciated Tory’s “collaborative approach” but will continue to fight for “the same funding opportunities to combat gun & gangs that Toronto has received.”

He said that the fact that an estimated 60 per cent of homicides in Peel Region are gang-related is “clear proof” of the need for that funding.

“According to Peel Police, our gang activity is from gangs that identify themselves with Toronto community based names but their members are dispersed throughout the GTA including Peel Region. This is why I have been making the point that we need regional solutions and funding,” he said.

I am sick & tired of 416 gang activity spilling over into Peel Region. We still have not received any of the gun & gang funding that Toronto & Ottawa receive. This is yet another reminder that gang activity doesn’t respect postal codes.The province needs to look at bigger picture https://t.co/XoIZhwjfoB