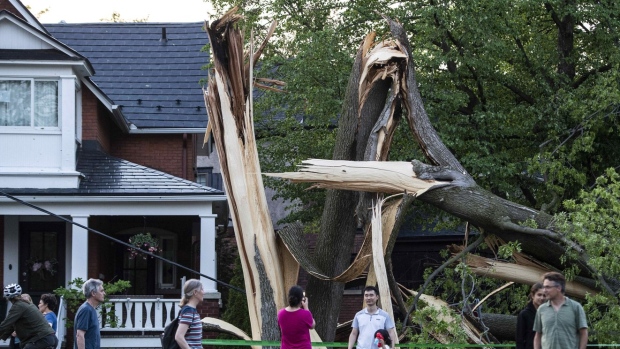 Residents and community members gather to look at a tree that was destroyed during a major storm in Ottawa on Saturday, May 21, 2022. Over five months after a powerful storm damaged property and left people without power for days, the City of Ottawa has yet to be reimbursed by the provincial government for its recovery costs. THE CANADIAN PRESS/Justin Tang

OTTAWA - More than five months after a powerful storm damaged property and left people without power for days, the City of Ottawa has yet to be reimbursed by the provincial government for its recovery costs.

The derecho, a line of intense, fast-moving windstorms, originated around Sarnia, Ont., on May 21 and travelled north to Quebec, causing 11 deaths, damaging buildings and temporarily forcing many people from their homes.

Outgoing Ottawa mayor Jim Watson is still discussing reimbursement with the provincial government, which, according to the mayor's office, promised to pay all municipal recovery costs.

The storm bill is pegged at around $20 million for city recovery, including fixing damage to municipal property and debris cleanup.

“They said they'd be there for us, they'd help us,” said outgoing Coun. Scott Moffatt, who did not run for re-election in last week's municipal vote. “So there's no reason to believe that they wouldn't finish or follow through with that commitment.”

If the provincial government doesn't make good on that promise the city might have to take the money from its reserve fund, intended for unexpected financial emergencies, he said.

The Insurance Bureau of Canada has said the insured losses will top $875 million, making it the sixth most-expensive storm for insurance companies in Canadian history.

In late September, Watson wrote a second letter to Ontario Premier Doug Ford to designate the city as an area eligible for money from the Disaster Recovery Assistance for Ontarians program. It allows homeowners, tenants, non-profits, small businesses and farms to submit claims for financial aid for damages associated with the storm.

The mayor's office says it has yet to receive a response.

Coun. Catherine Kitts who was returned to office in the recent municipal election, has been making the case for many residents who are affected months later. She said some still lack proper roofs due to their inability to afford repair costs.

“People are really hurting and they feel abandoned by the government,” said Kitts. “Why have this program if you're not going to use it in the wake of disaster?”

This report by The Canadian Press was first published Oct. 31, 2022.