All Toronto-bound lanes of the QEW remain closed at the Burlington Skyway after a truck struck scaffolding in a construction zone on Thursday afternoon.

At around 3:30 p.m., a dump truck with its bucket in an elevated position hit the scaffolding, causing visible damage and major traffic disruptions.

Police say only minor injuries were reported and a 34-year-old Brampton truck driver is now facing an impaired driving charge in connection with the incident.

The man has been released on bail and will appear in court at a later date.

“Obviously traffic is hugely impacted because all lanes are currently closed,” Schmidt said.

Toronto-bound QEW lanes are closed at Red Hill Valley Parkway and could be for days, according to a Tweet by Burlington Mayor Rick Goldring.

“Toronto bound Skyway Bridge is closed down due to an accident and it could be closed for days as there is concern about damage to the bridge,” Goldring said.

Metrolinx Spokesperson Anne-Marie Aikins said some GO Transit bus routes have been impacted by the accident and is encouraging riders to check out GO Transit's website for any service changes.

Police are unable to say when the bridge will reopen but said structural engineers will need to assess the damage before that decision can be made.

Ministry of Transportation Spokesperson Astrid Poei said the bridge was undergoing construction as part of a mutli-year rehabilitation program.

Poei said the MTO wants to ensure that the engineers are not "rushed" in their examination of the structural integrity of the bridge.

"Safety is our top priority so we had to close the bridge just to be sure," Poei said.

"Anytime that there is something visually out of place, we would take swift action." 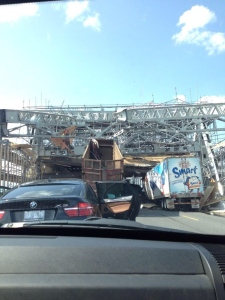 A damaged portion of the Burlington Skyway bridge is pictured in this picture submitted by a CP24 viewer Thursday, July31, 2014. (submitted)

A traffic camera image of the Burlington Skyway is shown after a truck struck scaffolding, shutting down all Toronto-bound traffic Thursday, July 31, 2014.