NDP promises $4.8B over 8 years for aboriginal education 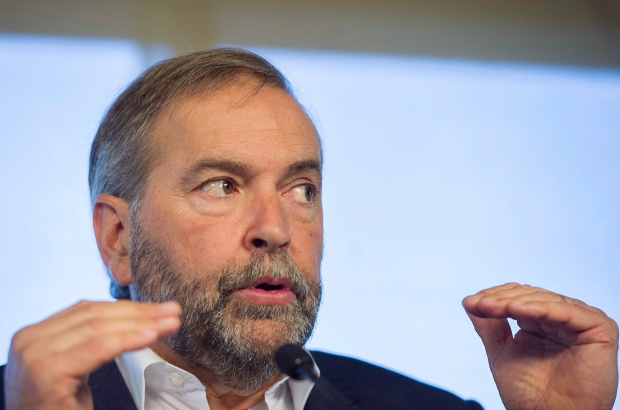 ENOCH, Alta. -- An emotional Tom Mulcair promised to form a nation-to-nation relationship with aboriginal peoples as he unveiled Wednesday the indigenous plank of his platform.

In one of the centrepieces of the NDP's plan, Mulcair committed to removing the two per cent cap on annual federal funding increases for reserve programs and services.

He also committed $4.8 billion over eight years for aboriginal education -- the first $1.8 billion to flow over the next four years with the rest to follow in a second mandate.

If the NDP wins government on Oct. 19, Mulcair said his success as a prime minister would be measured by progress for First Nations.

"I've said to you there's no issue on which I've held more meetings," Mulcair said at a forum hosted Wednesday by the Assembly of First Nations in Enoch, Alta.

"I would dare say to you that in fact, I've held more meetings on First Nations, Inuit and Metis questions across the country than all other issues combined."

Mulcair said aboriginal issues have been a "top priority" for him because he believes the future of the country depends on improving conditions in indigenous communities.

"We can't keep going at it this way," he said. "It's fruitless, it brings us down a path to failure if we continue with what the Conservatives and Liberals have done for 148 years."

Mulcair's comments were met with a bit of skepticism.

"Why should we believe you?" former Treaty 8 First Nation leader Rose Laboucan asked Mulcair during a question and answer session.

Laboucan, who refuses to vote Conservative, is still an undecided voter.

"I want someone who is going to make a difference and a change for real," she said.

Mulcair stressed the sincerity of his commitments.

"What I am saying to you is this: the numbers that I have given you here today are the beginning of a new era," he said. "You spoke to me from your heart; when I'm speaking to you, it is from the heart."

The issue of aboriginal education funding has been a source of friction between the New Democrats and Liberals.

The NDP has questioned how Liberal Leader Justin Trudeau can follow through on his pledge to bolster First Nations education by $1.8 billion, suggesting there is a $1.7 billion shortfall in the Liberal fiscal framework.

Trudeau has defended his party's math and says he intends to top up unspent government money with hundreds of millions more every year to ensure aboriginal education is properly funded.

In their budget released this spring, Conservatives earmarked $200 million over five years beginning in 2015-16 for First Nations education.

Mulcair and Trudeau are in agreement on one issue: the need for a national public inquiry into missing and murdered aboriginal women.

On the campaign trail Tuesday, Stephen Harper reiterated such a study is not going to happen under a Conservative government.

It is "way past the time" for studying the subject because there have been some 40 examinations already, he said, adding that a re-elected Conservative government would pursue efforts to prevent violence against aboriginal women and ensure appropriate penalties are in place for abusers.

"Most of these murders, sad as they are, are in fact solved," Harper said.