Feds and province offer up $3.4 billion in funding to revive Hamilton LRT project 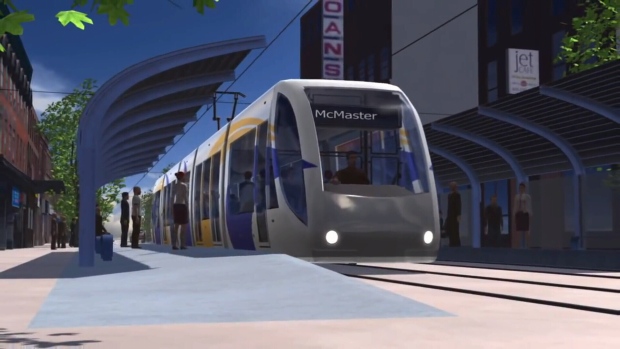 A rendering of a planned light rail transit line in Hamilton that was cancelled in 2019 is shown. The provincial and federal governments have committed $3.4 billion in funding to revive the project.

The provincial and federal governments have committed $3.4 billion in funding to revive a planned light-rail transit line in Hamilton that was scrapped by the Ford government in 2019.

The 14-kilometre line would travel from Eastgate Square to McMaster University via downtown Hamilton.

The funding announced on Wednesday would cover the capital costs of the project, though Hamilton city council will still have to endorse the revived project and agree to cover all future operating and maintenance costs.

A similar light rail transit line was previously cancelled by the Ford government in December 2019 due to ballooning costs that it said had taken the price from an initial estimate of $1 billion to $5.5 billion. At the time Hamilton Mayor Fred Eisenberger called the decision "a betrayal."

“I am optimistic (council will approve it) because is essentially the project we started with back in 2015. Same level of commitments for a no-capital contribution from the City of Hamilton and a commitment to operating and maintenance and we do have very specific numbers on what those costs would be for Hamilton,” Eisenberger said during a press conference on Thursday morning. “Essentially this is what the city has been asking for, this is what the city has supported in the past and it is what it being delivered today. So I hope members of council consider that when we look at the memorandum of understanding and get on to next steps.”

The $1.7 billion contribution from the federal government is part of a larger $12 billion investment in five rapid transit projects in the Greater Toronto and Hamilton Area, including the Ontario Line subway in Toronto.

The Ontario government had previously committed $1 billion to Hamilton transit but will now kick in an additional $700 million as part of the deal with the feds.

Catherine McKenna, federal minister of infrastructure and communities, said during Thursday’s news conference that the government wanted to support “shovel-ready projects” and believes that it has found “awesome” one in the Hamilton LRT.

McKenna, however, said that the money must be used for an LRT and cannot be put towards the cost of a bus rapid transit line, as some Hamilton city councillors have pushed for.

“This is the only shovel-ready project. The deal is specifically for the Hamilton LRT,” she said.