Fire crews are investigating after a blaze ripped through a home in Pickering Tuesday afternoon.

At around 5:30 p.m., first responders received a call about a fire at a house on Secord Street, near Valley Ridge Crescent.

When fire crews arrived, the blaze had already spread to the roof causing significant damage to the residence.

Five fire trucks attended the scene to put out the blaze.

“It took approximately 30 minutes to get the fire under control. It was quite challenging with the heat,” Pickering Fire Platoon Chief Dominic Browne told CP24.

Browne said there was one person inside the house at the time of the fire.

That person was transported to hospital in stable condition, possibly for smoke inhalation, according to Browne. 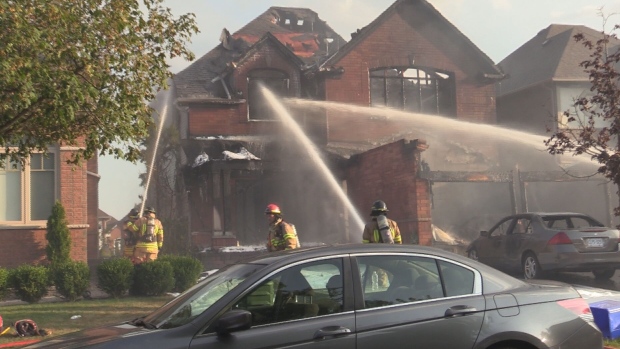 A firefighter was examined by a paramedic after having some issues battling the intense heat and has since been deemed OK, Browne said.

Durham police and fire crews remained on scene into the evening to investigate the cause of the fire.

“It looks like it possibly started near the front of the house… but we’re [still] investigating,” Browne said.

The Ontario Fire Marshal has also been notified.

No injuries were reported after a fire tore through a home in Pickering Tuesday afternoon.