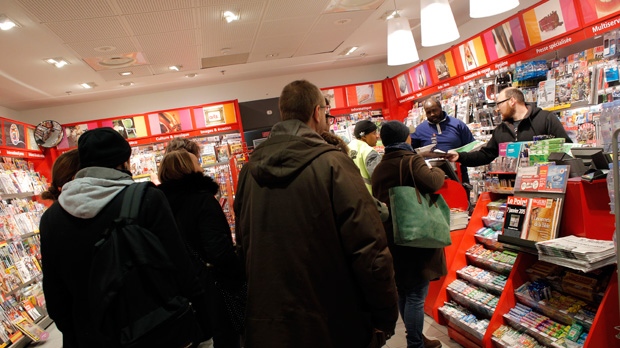 People queue up to buy the new issue of Charlie Hebdo newspaper at a newsstand in Paris Wednesday, Jan. 14, 2015. Charlie Hebdo's defiant new issue sold out before dawn around Paris on Wednesday, with scuffles at kiosks over dwindling copies of the paper fronting the Prophet Muhammad. In the city still shaken by the deaths of 17 people at the hands of Islamic extremists, a controversial comic who appeared to be praising the men was taken into custody. (AP Photo/Christophe Ena)

Torontonians planning on purchasing a copy of the latest Charlie Hebdo magazine when it hits local newsstands on Friday may have their hopes thwarted.

The issue, which depicts a caricature of Prophet Muhammad on the cover in response to the terrorist attacks in France last week, has already sold out in pre-orders in two of the five stores where the newspaper-styled magazine will be available.

Arlene Shepard, the vice-president of press management at Gateway Newstands, said customers have pre-ordered all 55 copies being sold at two of their outlets which continue to be inundated with calls.

The issues will be delivered by mid-morning to the Gateway Newstands locations at Yonge and St. Clair and at BCE Place. The stores may not even display the magazine on shelves, Shepard said, as they have all been pre-sold.

The magazine is also being sold at two Presse Internationale stores on Bloor and Queen streets and an International News outlet on Front Street.

A spokesperson from Presse Internationale told CP24 on Wednesday that they ordered 30 copies, but they are not sure how many they will receive. The store used to stock Charlie Hebdo magazines three years ago, but stopped doing so because it did not sell. This time, they have been getting a ton of calls, some from the U.S., from people wanting to buy the latest issue, the spokesperson said.

International News told CP24 that they ordered 60 copies of Charlie Hebdo and 13 have been pre-sold. It is the first time the store is getting the magazine.

Demand in Quebec is also high and Shepard said she has not seen anything like this since Princess Diana died.

Charlie Hebdo is usually only available in Quebec and one store in Toronto – the Gateway Newstand at Yonge and St. Clair. Distribution is now more widespread in light of last week’s terror attacks in France with copies being made available in four additional Toronto stores, one in New Brunswick, one in Nova Scotia and a few in Vancouver.

The latest issue went on sale in France on Wednesday and was sold out before dawn in Paris. Charlie Hebdo's publisher has said that it is increasing production of this week's issue to an unprecedented three million copies worldwide compared to its usual 60,000.

People have also begun auctioning this week's Charlie Hebdo on eBay. Some users had listed its sale price at more than $100,000. By Wednesday afternoon, bids had reached more than $400.

Charlie Hebdo is considered controversial for its commentary on several religions and depictions of Prophet Muhammad for which it has received threats in the past. The newsroom was even bombed in 2011 for one such cartoon of the prophet. Some Muslims consider all images of their prophet to be blasphemous.

Shepard said she is not worried about backlash for selling the magazine because Gateway Newstands is not a censor board, but a retailer doing their primary job of delivering news to customers.

Last week’s terror attack spanning three days began with two gunmen storming Charlie Hebdo’s offices and killing 12 people. The next day, a police officer was killed and in a third attack, another gunman held people hostage at a kosher grocery store. Four people were killed in the hostage incident.

The three gunmen were also killed by French security forces that are still looking for more collaborators. An al Qaeda leader in Yemen is claiming responsibility for the attacks.