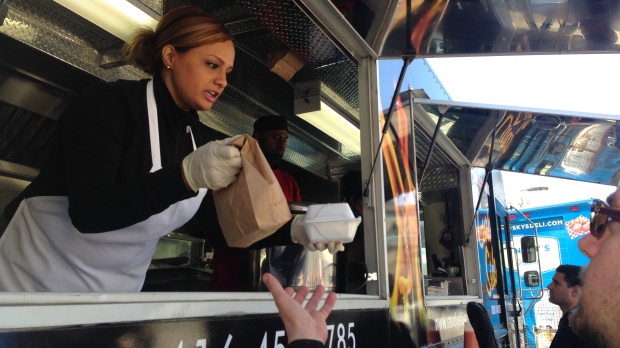 TORONTO -- Car after car lined up in the parking lot of Yorkdale Shopping Centre this weekend to try something different -- a drive-thru food truck festival.

It's the first time a drive-thru food truck festival has ever been held in Ontario, with organizer Street Eats Market consulting with Toronto Public Health to find safe ways to stage the event.

"This festival actually we were planning it to be an actual market itself pre-COVID, and obviously we had to pivot," said Philip Suos, the company's marketing director, as he stood in the mall's parking lot on Friday afternoon with dozens of cars lined up behind him. "We've been working with public health on this drive-thru concept and look at the turnout, it's been excellent."

Customers placed their orders online before driving to Yorkdale's north parking lot. A lane number was assigned to each order, allowing the customers to pull up beside their food truck of choice with their order waiting for them. Any front-facing server in the truck had on personal protection equipment.

"It's been a challenge here and there because we're trying to find the best method to keep everyone safe," said Suos. "We're taking the first steps to proving this concept works."

Suos says that starting in July, drive-thru food truck markets will be set up in Burlington, Oshawa and Newmarket.

A dollar from every online order for the Yorkdale event is being donated to the Baycrest Foundation, which raises funds for the Baycrest Centre, a research and teaching hospital for the elderly.

"It's a really challenging time for charities," said Josh Cooper, the Baycrest Foundation's president and CEO, who noted that the need for charities is higher than ever during the COVID-19 pandemic. "It's a time where people really need to think differently and work on getting more creative and something like Street Eats food truck festival was a real blessing that just kind of came out of the sky."

The partnership between Street Eats and Baycrest was facilitated by Yorkdale, which has a long association with the charity. The mall also was eager to bring people back as some of its stores and restaurants reopen.

"It's really important for us to give back and Baycrest has been a really great partner for us," said Mina Barbuto, Yorkdale's marketing manager, who added that it has been a long three months for everyone and that the shopping centre wanted to give people a new activity over Father's Day weekend. "That focus on the charity component is something we wanted to support."

This report by The Canadian Press was first published June 20, 2020.