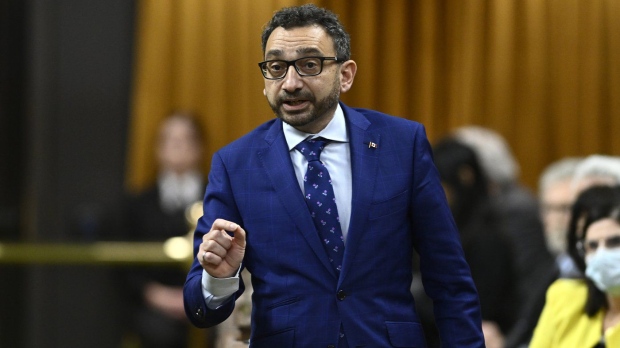 Minister of Transport Omar Alghabra rises during Question Period in the House of Commons on Parliament Hill in Ottawa on Thursday, Dec. 1, 2022. THE CANADIAN PRESS/Justin Tang

OTTAWA - Canada should make it so air travellers are automatically entitled to compensation from airlines when their flights are disrupted, rather than having to make claims on their own, a passenger advocate said Tuesday.

Beginning Thursday, that same group of MPs will begin an emergency study into the chaos that erupted across the country's airports and airlines over the holidays, including what is likely to be a grilling of Transport Minister Omar Alghabra from Opposition members about how the government plans to address the problem.

“The airlines are taking advantage of the regulatory environment, where enforcement is basically non-existent,” Lukacs said in an interview Tuesday. “That is where the problem lies.”

A winter storm that swept parts of the country before Christmas Day brought trouble to what was an already hectic travel season. The air industry is still recovering after travel ground to a halt during the first two years of the COVID-19 pandemic, leading to widespread layoffs in the sector.

Thousands of passengers saw their flights cancelled or delayed to due to the poor weather. But what has troubled political leaders most is how passengers say they were treated.

Hundreds of Sunwing customers were stranded in Mexico after the vacation destination airline cancelled their trips. Thousands more were left scrambling after the airline cancelled flights departing from Saskatchewan until Feb. 3 due to what it called “extenuating circumstances.”

Other passengers described improper communication - or lack thereof - from airlines, and having to sleep on airport floors as they waited for answers.

Alghabra has called what happened over the holidays “unacceptable.”

His office said Tuesday that he was unavailable for an interview, but provided a statement outlining potential changes to the regulations that offer protection to airline passengers.

The rules introduced in 2019 impose what the Canadian Transportation Agency, the federal regulator, calls the “minimum airline requirements.” They outline when travellers are eligible for compensation for hiccups such as lost baggage, delays on the tarmac and cancellations.

Nadine Ramadan, a spokeswoman for Alghabra, said work has been underway since before the holidays on how to strengthen the existing regime. She said the government's intention is to introduce legislation sometime in the spring.

“These changes will help increase efficiency and put the onus on airlines to reimburse passengers,” she said in a statement.

“All options are on the table to ensure that what happened over the holidays does not happen again.”

In a report presented to MPs last month,Lukacs's group recommended legislative changes be made so that airlines must provide compensation “promptly and without the passenger having to request payment” when it comes to delays and cancellations.

He said that the way it works right now, a passenger who feels they are entitled for compensation has to send a letter to the company requesting payment.

From there, he says, the airline is supposed to reply within 30 days, either agreeing to provide the compensation that was requested or explaining why it doesn't think the traveller is owed money.

“(The) mere fact that you as a passenger have to approach the airline and say, 'Hey, I want my compensation,' is a problem,” Lukacs said, because many passengers don't know their rights.

He said what often happens is that travellers don't accept the rationale provided by an airline to avoid paying up, so they take their claims to the Canadian Transportation Agency instead in the hopes of seeking compensation.

That's where another problem lies, according to MPs: The regulator is facing a backlog of more than 30,000 complaints.

A spokesperson for the agency said that as of Dec. 20, 2022, it had 31,000 pending complaints. In the time since then, which included the holiday travel chaos, it received another 2,800.

Conservative MP Mark Strahl, who sits on the committee, said in an interview that he believes Alghabra must hold the agency accountable for clearing complaints in a timely manner.

One of the issues, he said, is it doesn't appear there are service standards in place for the agency when it comes to timelines for dealing with claims.

Strahl said he would support making airlines automatically compensate passengers, adding he believes the system needs to operate in a way that benefits travellers over companies.

“Someone in seat 13B might know about it, but in 13A they don't, and so one gets compensated, the other doesn't,” he said of the existing measures.

“Once a flight is deemed to have been in violation, every passenger should receive compensation.”

The NDP has also voiced concerns about the existing regime and has asked for specifics about when Alghabra plans to make changes.

With the holiday travel chaos extending to rail passengers, Strahl suggested that passenger protections could be extended to other transportation customers, such as those who travel by train.

Over the Christmas weekend, a CN Rail derailment led to the cancellations of trains between Ottawa, Montreal and Toronto. Passengers travelling on a train between Ottawa and Toronto were also stranded with limited washroom and food access for nearly 20 hours.

On Tuesday, Via Rail Canada CEO and President Martin Landry issued an apology, saying the Crown corporation should have been “more forthcoming in sharing information about trains that were delayed and in communicating updates.”

“We also know we should have adopted a different approach in supporting passengers on trains that were delayed for lengthy periods,” Landry's statement said.

This report by The Canadian Press was first published Jan. 10, 2023.