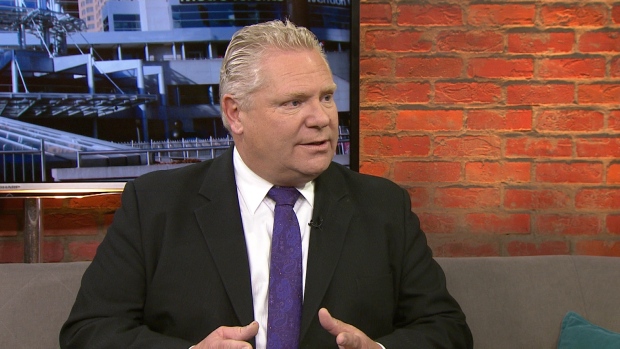 Former city councillor Doug Ford made a veiled threat at the makers of a new film that’s loosely based on the late Rob Ford’s crack video scandal on Wednesday, suggesting that they shouldn’t cross the street when he is driving down the road.

‘Filth City’ is about a fictional big-city mayor named Tom Hogg who is caught on video smoking crack and who will “do almost anything” to keep the video from seeing the light of day.

A poster for the movie features the protagonist clutching an assault rifle with a crack pipe sticking out of his mouth. The tagline on the poster reads “The crime rate is high. So is the mayor.”

Speaking with CP24 on Wednesday, Ford called the film a “disgusting,” “two-bit movie” and said the person behind it is a “scumbag.”

The movie will premiere at Scotiabank Theatre on March 25 as part of the Canadian Film Fest.

“This guy is nothing but a scumbag to put something like this together and laugh and cheer and make fun of someone that had a real illness,” Ford said, without explicitly identifying who his comment is directed at. “Absolutely it is hurtful. Make sure he is not crossing the street when I am driving down the road. It is frustrating as anything.”

‘Filth City’ is directed by Andy King and stars Pat Thornton as Tom Hogg, who is the crack-smoking mayor of the fictional city of York.

Ford told CP24 that he hasn’t seen the movie but he said that the trailer is “all he needs to see” to render judgement.

“This is a movie about attacking someone that had a sickness that millions of people had,” he said. “I am disappointed. It is a misrepresentation. There is nothing accurate about it.”

Though ‘Filth City’ makes no actual mention of Ford, filmmaker Andy King told CP24 on Wednesday that is largely “inspired” by the crack video scandal that came to define his mayoralty.

King said it is “outrageous” that Doug Ford would threaten him for telling a story that was widely publicized in Toronto and across the world.

“I think it is pretty outrageous to say that he is going to run me over with his car in reaction to this movie,” he said. “We are indie filmmakers and we are trying to make a compelling story that people can relate to. I wanted to make a Canadian crime story and in the process of making it this was on the front page every day. We couldn’t help but be influenced by it.”

King said the March 25 screening of ‘Filth City’ has already sold out but he said that he is working to get a second screening added to the Canadian Film Fest due to the high level of interest.