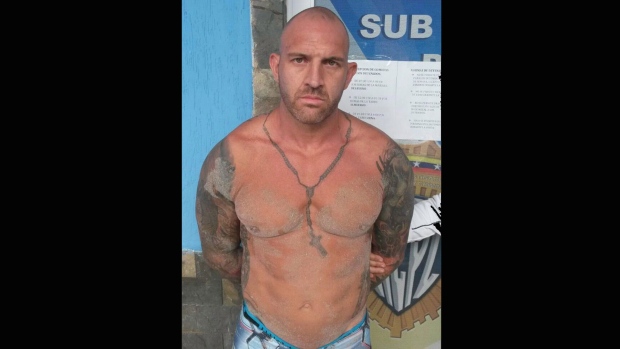 HALIFAX - A Nova Scotia mother confronted the former MMA fighter accused of murdering her son Monday, shouting out to him as he was led into a court house after being extradited from Venezuela.

Surrounded by about three dozen friends and supporters, Gloria Adams called out to Steven Douglas Skinner as officers escorted him from a sheriff's van and into Dartmouth provincial court under a heavy police presence.

“Skinner, Skinner - who's this right here?” she shouted, gesturing to herself as the Cole Harbour man was led into the building in handcuffs. “I feel better now.”

The crowd broke out in applause after the much-tattooed Skinner was taken inside to face a second-degree murder charge in the death of Stacey Adams, 20. A few people wore t-shirts saying, “We Stay On Point Like Stacey Adams.”

Police had issued an international warrant for Skinner's arrest shortly after Adams was found dead in Lake Echo in April 2011.

Skinner, 44, was arrested by Venezuelan law enforcement on Margarita Island in May 2016. A photo released by Venezuelan authorities after his arrest showed Skinner in colourful swim trunks, his bare chest covered in sand.

Skinner, who fought as a light-heavyweight at 205 pounds, had a 3-2 professional record, according to mixed martial arts website Sherdog.com.

RCMP worked with Venezuelan authorities for the past year and say Skinner was extradited to Halifax on Saturday.

Gloria Adams said she was at work Saturday when a homicide officer notified her that Skinner had touched down on Canadian soil and would be appearing in court a couple of days later.

She said she was intent on addressing Skinner, who looked briefly at her as he climbed the stairs to the court.

“I just wanted him to understand how much my son meant to me, always will,” she said after his brief court appearance.

She said it was “bittersweet” seeing him in court, years after launching a bid to have him arrested and returned to face the charge. She was accompanied by Ellen Etmanskie, the mother of Stacey Adams' five-year-old son.

“As time goes on, you live with hope, you continue your hunt, you fulfil your promise and at the end of the day let it be an example for anybody else out here that wants justice. Listen, jump on board and do everything you gotta do to bring it,” Adams said.

“When something like this happens to a family, a mom, you get thrown into a world that you don't even know exists. I went into a rage that I never thought that as a human being and as a mother that I was capable of having.”

Skinner's case was adjourned until July 5.

He also faces several other charges, including aggravated assault, forcible confinement and weapons charges, in relation to a 2009 incident in Lower Sackville.