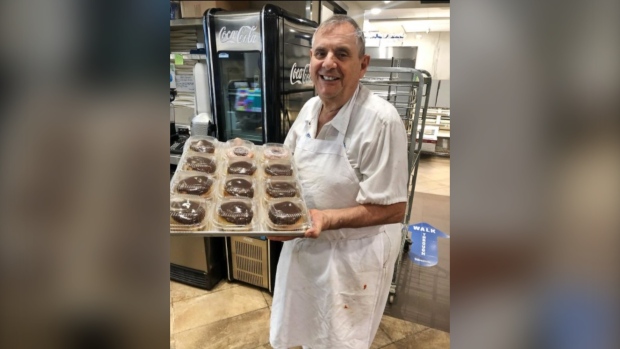 Natale Bozzo, the founder of SanRemo Bakery and Cafe in Toronto's west end, has died after contracting COVID-19, his family says. (Instagram:@sanremobakery)

The patriarch of a family-run bakery in Toronto’s west end is dead following an ongoing battle with COVID-19.

In a post to SanRemo Bakery and Café’s Instagram page Thursday, the Bozzo family confirmed that Natale Bozzo had died after six weeks in hospital.

“He fought very hard, he was in good health prior to this, and we learned of his failing health through very difficult phone calls from the hospital and thankfully we were able to say goodbye,” the post reads.

He started working in Toronto’s Little Italy neighbourhood at Sicilia Bakery on College Street before opening SanRemo Bakery with his brothers in Etobicoke in 1969.

Bozzo would become the sole owner of the bakery located at Royal York Road and Simpson Avenue in the 90s with his three sons.

He would later retire, but the family said Bozzo would often “help out around the bakery as it was his passion.”

“He was an incredible baker, and most hardworking man we know. He was resilient and resourceful. He was kind and a friend to all,” the family said in the post.

Well-known for its Italian-inspired dishes and over-the-top desserts, the Etobicoke staple was forced to close its doors on Jan. 22 after several employees tested positive for COVID-19. They reopened for business on Feb. 6.

The bakery said at the time that it was working with Toronto Public Health and following their advice on how to move forward.

The family said that Bozzo’s death will be followed by what they describe as an “inexplicable time of grieving.”

“He said the secret of baking was to put a pinch of love into everything, and we’ll be missing that pinch in ways we can’t describe.”

"My condolences go out to Rob, Nick, Ed, and the entire family of Natale Bozzo, a true local champion who followed his passions," Ford wrote. "A family-owned business, the SanRemo Bakery and Café has been a staple in Etobicoke for many years. God bless the Bozzo family."