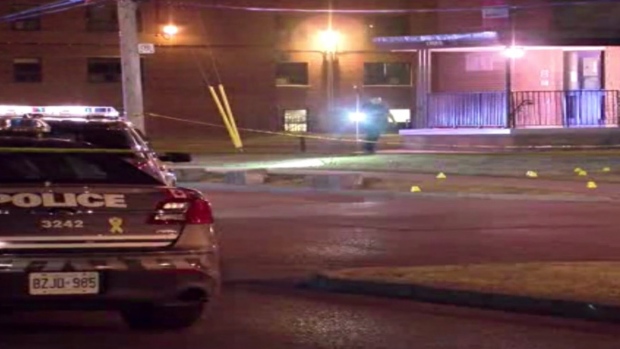 Police and evidence markers are seen after a gunfight near Flemington and Replin roads on July 8, 2020.

Investigators say they are looking for four male suspects after a large exchange of gunfire outside an apartment building in the city’s Lawrence Heights neighbourhood early on Wednesday morning.

Toronto police say they were called to Flemington and Replin roads at about 12:40 a.m. by numerous callers reporting multiple gunshots being fired.

Police say three males in a white sedan drove up to a fourth male sitting outside and opened fire on him.

The fourth male returned fire, and police have so far located 15 shell casings connected to the incident.

The fourth male eventually retreated from the scene on foot and the three attackers got back in their vehicle and sped off.

They were last seen heading westbound on Flemington Road.

Hospitals have not received any gunshot wound victims as a result of this incident.