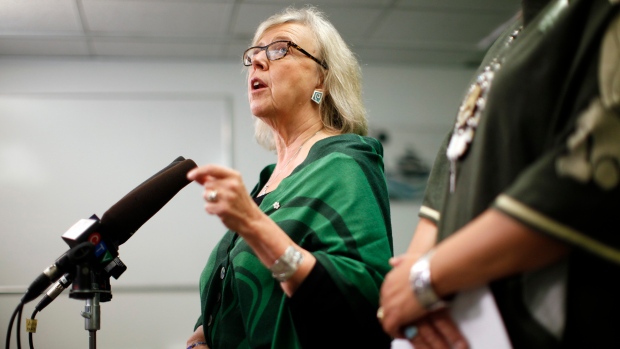 Green Party Leader Elizabeth May announces the Green government will expand the single-payer medicare model to include pharmacare for everyone during a press conference at the campaign office of candidate Racelle Kooy while in Victoria, Wednesday, Oct. 16, 2019. THE CANADIAN PRESS/Chad Hipolito

QUALICUM BEACH, B.C. - Green Leader Elizabeth May says talk of a coalition government in Canada is “premature” until after the Oct. 21 election.

May says parties can plan to work together before ballots are cast in countries with a proportional representation electoral system, but such talk is “meaningless” in Canada's first-past-the-post system.

Liberal Leader Justin Trudeau had electoral reform as one of his campaign promises in 2015 but dropped the idea shortly into his mandate.

NDP Leader Jagmeet Singh said over the weekend that he would consider entering into a coalition with Trudeau's Liberals, though he has recently appeared cooler on the idea.

May is campaigning in British Columbia today to promote her party's fisheries policy.

This report by the Canadian Press was first published Oct. 17, 2019.