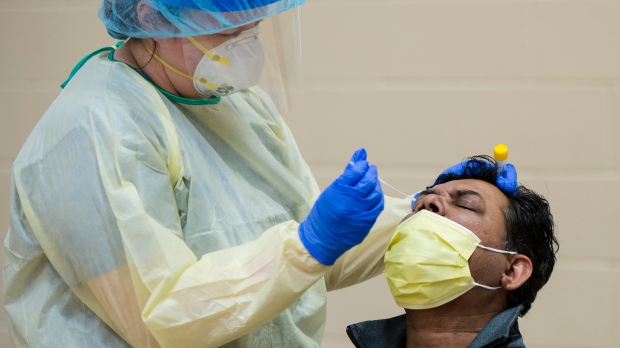 Muhammad Junayed gets tested for COVID-19 from a health care worker at a pop-up testing centre at the Islamic Institute of Toronto during the COVID-19 pandemic in Scarborough, Ont., on Friday, May 29, 2020. THE CANADIAN PRESS/Nathan Denette

The potential harms and costs of testing long-term care home staff every week likely outweigh the benefits, experts with the Ontario’s COVID-19 Science Table say in a new report.

Ontario long-term care staff originally had to undergo COVID-19 testing twice a month as part of a pandemic policy in May 2020. In November, that policy was revised to include weekly testing in high incidence areas in the province’s orange, red and grey lockdown zones.

In all other zones, the testing occurs every two weeks.

According to a report released on Tuesday, the science table said that Ontario is the only province in Canada requiring mandatory screening of all long-term care home staff. It also indicated that of the more than 700,000 tests conducted between June 28, 2020 and March 13, 2021, the positivity rate was about 0.16 per cent.

“Despite the theoretical benefits of routine asymptomatic SARS-CoV-2 screen testing, including detection of pre-symptomatic, asymptomatic, or very mildly symptomatic staff infected with SARS-CoV-2, and detection of COVID-19 outbreaks when not identified by other surveillance systems, there is no available real-world evidence to support or refute the benefits of screen testing in preventing LTC home COVID-19 outbreaks,” the report reads.

The report cites a number of potential harms related to weekly COVID-19 testing, including pain and discomfort of the nasal swabs, which could lead to more serious injury, testing fatigue, and a false sense of security with a negative result. It also mentions the risks of a false positive test. “Furthermore, a slow test turn-around time can also render the screen test useless if an infected LTC staff continues to work because of a delay in receiving a positive test result,” the science table said. “In early October 2020, only 5.5 per cent of routine asymptomatic staff screen tests in Ontario were reported within 24 hours and only 32 per cent within 48 hours.”

“This has, however, substantially improved in recent months.”

The report makes reference of the provincial government’s latest announcement that rapid antigen tests would be used at long-term care homes. These rapid tests, while less invasive than a nasal swab, also have “lower test sensitivity, requiring an increased testing frequency of two to three times per week” in COVID-19 hot spots.

The report acknowledges that each home would require an additional two full-time employees to implement such a consistent testing strategy.

CTV News' Science and Technology Specialist Dan Riskin says that while it may seem like common sense to test as many people for COVID-19 as possible, the data may be proving it isn’t worth the effort.

“What they're saying is, maybe sometimes that's not the appropriate approach, maybe if we have good data that shows how often those tests really pay off and we think about what cost it is to do those tests, and we see that the benefits don't outweigh the cost, we shouldn't be doing it,” Riskin said. “They're just saying, you know what, reality check, it's just not working.”

Riskin added that considering most residents and long-term care staff are now vaccinated against COVID-19, it may not be worth doing 700,000 COVID-tests just to catch the incredibly small proportion of employees who may be asymptomatic.

“They've been vaccinated in a lot of those long-term care facilities and so that is a huge benefit. We also have these variants that are very scary and we're not sure exactly how they're going to play out, so it is a balancing act and it's not, it's not a light decision,” he said. “But I think it really does make sense when you think about all the infrastructure that has to be in place, those tasks that need to be done could be done in other places. They're just not catching that many fish this way.”

The COVID-19 Science Table has said that as of March 21, more than 68,000 Ontario long-term care residents received at least one dose of the vaccine. More than 61,000 are considered immunized with both shots.

Eight weeks after the vaccine rollout began in Ontario, there was an estimated reduction of COVID-19 in about 89 per cent of long-term care residents, the report said, and about 79 per cent in health-care workers.

A spokesperson for the Minister of Long-Term Care Merrilee Fullerton said that there remains an “ongoing need to protect long-term care residents and staff” due to their vulnerability to the disease.

“The objective of surveillance testing is to protect vulnerable Ontarians living in long-term care homes by helping to prevent the spread of COVID-19 within homes. Point-of-care rapid antigen testing ensures that individuals entering the home can be screened simply and quickly and that positive COVID-19 cases that may otherwise be missed are identified,” Krystle Caputo said in a statement.

“The Ministry of Long-Term Care will continue to consult with, and act on, the chief medical officer of health’s advice and make a determination that’s in best interests of residents and staff.”