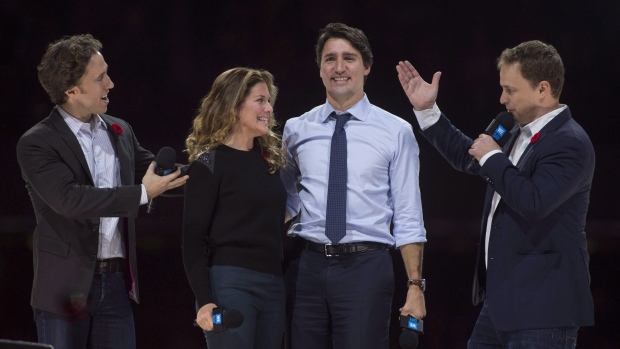 Co-founders Craig (left) and Marc Kielburger introduce Prime Minister Justin Trudeau and his wife Sophie Gregoire-Trudeau as they appear at the WE Day celebrations in Ottawa on November 10, 2015. THE CANADIAN PRESS/Adrian Wyld

OTTAWA - The federal ethics watchdog may have let Prime Minister Justin Trudeau off the hook but that won't deter opposition parties from issuing a scathing report on the WE Charity affair.

The House of Commons ethics committee, which spent months investigating the controversy, will issue its report today.

Committee members from all three main opposition parties have signed off on the majority report, which is expected to focus on the Trudeau family's connections to WE Charity and the preferential access to government officials granted to WE co-founders Craig and Marc Kielburger.

It is expected to include almost 20 recommendations.

Liberal members of the committee are to issue their own dissenting report.

The WE affair has bedevilled Trudeau's minority Liberal government since last summer when it decided to pay the charity up to $43.5 million to administer a volunteer student grant program