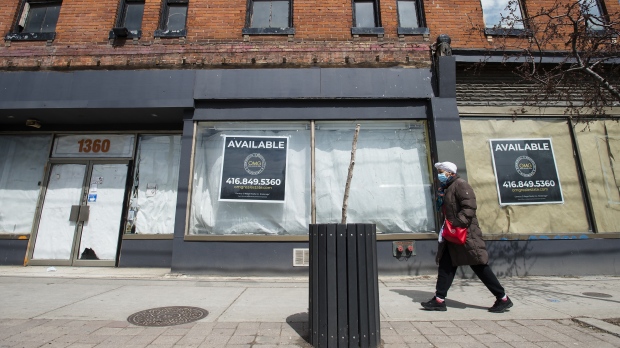 Space available signs are shown on storefronts on Queen Street in Toronto on Thursday, April 16, 2020. COVID-19 worries appear to be easing for some businesses. THE CANADIAN PRESS/Nathan Denette

The co-owner of a long-running book store in the Church and Wellesley neighbourhood says that he is facing costs of approximately $30,000 a month amid a global pandemic that has forced him to close his doors and is increasingly starting to feel like governments have “given up” on businesses like his.

The Glad Day Bookshop has been selling LGBTQ literature and hosting various events from its shop on Church Street for 50 years but co-owner Michael Erickson says that he is not sure how he will continue to operate, especially in light of his landlord’s decision not to apply for a rental subsidy program that is intended to help businesses dealing with a sudden loss in revenue.

Under the terms of that program, landlords can receive a subsidy to cover up to 50 per cent of their tenants rent for a three-month period so long as they agree to waive another 25 per cent of the rent owed.

The problem, Erickson said, is that tenants can’t access the program themselves and must rely on landlords who have mostly chosen not to apply for the subsidy, at least in Toronto.

“Of all the small business owners I have spoken to I don’t know one business owner that is getting the rent subsidy from their landlord. While the stats may say that 20 per cent of the landlords are using this I don’t know where they are. Maybe they are in Saskatchewan or Cornwall, Ontario but I don’t think they are in Toronto,” he said. “I would urge the government right away to have the subsidy go through small businesses instead of landlords.”

Erickson said that he pays about $18,000 in rent every month and also has $12,000 in other fixed costs that he still is still responsible for despite the closure of his businesses.

He said that a $40,000 loan provided by the federal government to small business was helpful but won’t be enough to keep his business afloat in the weeks and months to come, even if the orders forcing the closures of most businesses are soon lifted.

“We need more funding through loans and grants to stay afloat. Even if I open in six weeks or something it is going to be at reduced capacity and that means reduced revenue. So for a business that was just breaking even or barely breaking even now I am not,” he said.

Erickson was among a number of business owners in the Church and Wellesley neighbourhood who participated in a virtual press conference hosted by Coun. Kristyn Wong-Tam on Tuesday morning.

The business owners were all calling for a halt on all commercial evictions and changes to the rent subsidy program so that tenants can apply directly for support.

The press conference came after a survey was released by the Broadview-Danforth Business Improvement Area last month, which indicated that nearly-two thirds of the 561 businesses surveyed may have to close down for good within the next three months.

“All across this country small businesses are working to stay alive. Many of us are struggling and many of us are worried about reopening,” Christopher Hudspeth, who owns Pegasus Bar on Church Street, said during the press conference. “Bars and other gathering spots will be some of the last to restart. We need your help.”

Hudspeth said that his landlord informed him on April 30 that they would not apply for the federal rent subsidy program, leaving him on the hook for thousands of dollars in rent.

He said that the decision came despite the business having a 25-year history of paying its rent on time.

“I worry every day about my ability to reopen this place and what that means for the community and the wonderful people I employ,” he said.

While the Ford government has temporarily halted residential evictions, commercial landlords retain the right to lock out their tenants 16 days after rent was due.

Wong-Tam said that she has already seen numerous instances of businesses being evicted for non-payment of rent and expects the situation to get “much worse” without “urgent” government intervention.

“If you have begun eviction on a small business I implore you, I beg you to please stop because I can guarantee you that you will not have a lineup of new tenants to give you three times what you believe your properties is worth,” she said. “If you force a small business into bankruptcy and force them out through eviction you are informing and creating neighbourhood decay. You are literally devaluing your own neighbourhood.”