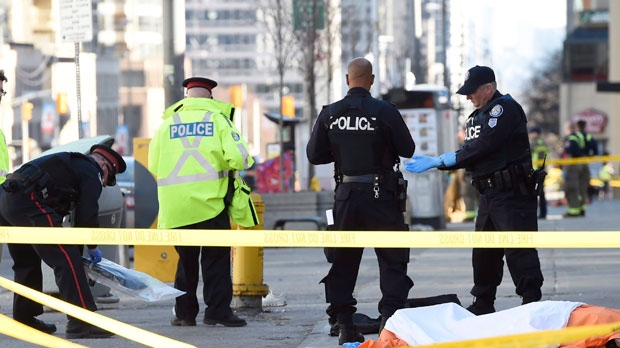 Police secure an area around a covered body in Toronto after a van mounted a sidewalk crashing into a number of pedestrians on Monday, April 23, 2018. THE CANADIAN PRESS/Nathan Denette

Those travelling around the area of Yonge Street and Finch Avenue in North York on Monday afternoon, likely experienced a frustrating commute.

Yonge Street was shut down both ways between Highway 401 and Cummer Avenue after a van struck “numerous pedestrians,” killing 10 people and injuring 15 others. Toronto Police tweeted that they expect road closers to last "several days."

At the request of police, the Toronto Transit Commission (TTC) also shut down subway service on Line 1, north of Sheppard Station at around 2:30 p.m. Service has since resumed, but trains continue to skip North York Centre station.

According to a TTC Report published earlier this year, Line 1 is the busiest of the transit lines, carrying about 450,000 passengers per day.

Go Transit is operating, but Anne Marie Aikins, a spokesperson for Metrolinx, said there may be diversions on Go Bus routes.