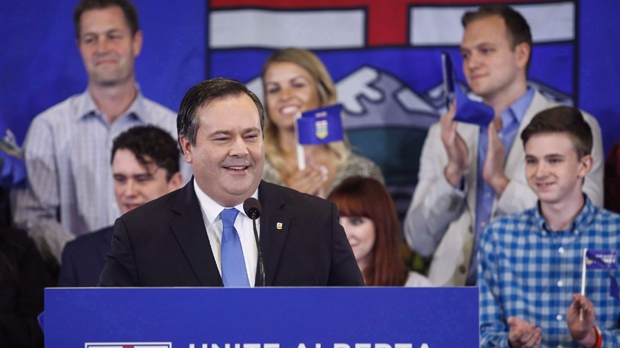 CALGARY -- Former MP Jason Kenney won the leadership of Alberta's Progressive Conservatives in a decisive first ballot victory Saturday on a promise to dissolve the storied party and revitalize the fragmented conservative movement.

"Today we have chosen unity. Today, it's springtime in Alberta!" Kenney proclaimed.

Supporters roared, cheered, chanted "Jason" and clouds of orange, white, and blue balloons floated down from the ceiling.

"Today this great party has acted with courage and vision to, in the words of (former PC premier) Ralph Klein, stop arguing about history and instead to make history," Kenney said.

Kenney promised that as premier he will take a wrecking ball to all the policies of Premier Rachel Notley's governing NDP, starting with the carbon tax on gasoline and home heating bills.

"Today is the beginning of the end of this disastrous socialist government," said Kenney.

"We have decided to ensure the defeat of this tax-hiking, job-killing, debt-loving, mean-spirited, incompetent NDP government."

Kenney will now begin the next phase of his unite-the-right campaign by seeking a deal with the Wildrose party to join forces under a new conservative banner.

Under Alberta rules, political parties cannot merge. Rather, they must fold up shop and surrender their assets before seeking to create a new party.

Wildrose party Leader Brian Jean has said he's open to meeting with the new PC leader Monday, but has stressed that any new conservative party will be created under a Wildrose legal framework, with the approval of Wildrose members.

"Wildrose has its dancing shoes on when it comes to creating a single, principled, consolidated, conservative movement," he said.

Kenney has stressed unity is necessary to avoid the vote splitting he says led to the majority win by Notley's NDP in 2015. Notley's win brought to an end four decades of PC rule in the province.

Unification with the Wildrose dominated the leadership race from the time last July when Kenney first pitched the plan. The Wildrose was created over a decade ago from disaffected right-wing voters, libertarians and Progressive Conservatives unhappy with what they perceived as a party that had stopped listening to the grassroots and had abandoned the tenets of fiscal conservatism.

The issue cleaved the party. Kenney's critics fear he will abandon the PC's centrist approach on social issues to embrace the social conservatism of the Wildrose.

Delegates booed Starke during his speech earlier Saturday when he warned that a merger with the Wildrose could tar the PCs with the label of intolerance toward women and minorities.

Both Starke and Nelson said they will stay on to move the party in the right direction.

"I'll be telling (Kenney) that Albertans expect to see a centrist, progressive conservative values (party) whether we call it that or something else," said Starke.

"We go forward now as conservatives together," added Nelson. "I will support (Kenney) in any way he wants."

The NDP immediately reached out to progressive voters on Twitter after Kenney's win.

"Progressives looking for a modern and moderate party? Welcome," the party said. "Join us."

For Kenney, unity is a road map with no road. There is no provision in the PC constitution to dissolve itself and the leader is just one vote on the party's board of directors.

The PCs and Wildrose, should they join forces, would have just two years to create constituency associations and field candidates in time for the next election, set for the spring of 2019.

Party president Katherine O'Neill said the board will meet Sunday to discuss the next steps on Kenney's plan.

"We have to work with this, and I'm looking forward to doing it."

Economic Development Minister Deron Bilous, at the convention to represent the governing NDP, said if Kenney wants to ratchet back spending, he needs to specify to Albertans which projects and programs he'll cut.