Jody Wilson-Raybould will sit as lone Independent in the Commons 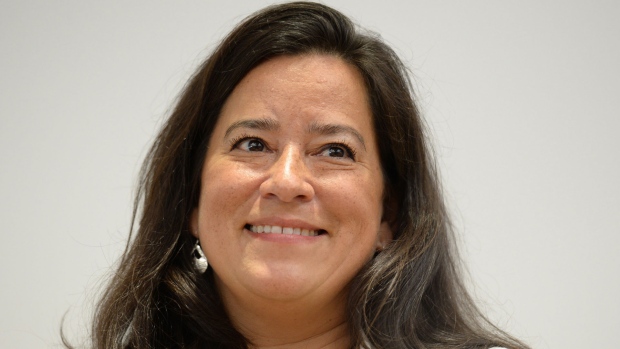 Jody Wilson-Raybould arrives at a news conference to discuss her political future in Vancouver, Monday, May 27, 2019. A book by former justice minister and attorney general Jody Wilson-Raybould will be released on Sept. 20, according to her publisher.THE CANADIAN PRESS/Jonathan Hayward

VANCOUVER -- Former Liberal cabinet minister Jody Wilson-Raybould says her victory as an Independent candidate sends a message to Ottawa about the need for change in the country's politics.

Wilson-Raybould will be the only Independent in the House of Commons after she was ousted from the Liberal party over the SNC-Lavalin scandal.

"We accomplished showing Ottawa, showing our political process, that independent, strong voices matter and that we can do politics differently," she said to roars of applause in her victory speech.

The federal campaign was plagued by divisive politics but Vancouver Granville voters have shown there's a different way, she said.

Wilson-Raybould quit Justin Trudeau's cabinet after she accused the prime minister and his office of inappropriately pressuring her as the attorney general to intervene in the criminal prosecution of Quebec engineering giant SNC-Lavalin on corruption charges.

Wilson-Raybould's decision to leave cabinet was followed by her colleague Jane Philpott, who failed in her attempt to win as an Independent in the Ontario riding of Markham-Stouffville. The two politicians supported one another at events throughout the campaign.

Trudeau eventually kicked both women out of the Liberal caucus and many of their supporters saw it as vindication when the federal ethics commissioner concluded that Trudeau violated the Conflict of Interest Act by improperly pressuring Wilson-Raybould to stop the prosecution of SNC-Lavalin.

After trailing in early results, dozens of supporters erupted in cheers when Wilson-Raybould pulled into first place ahead of her closest challengers, Conservative Zach Segal and Liberal Taleeb Noormohamed.

They chanted "Jody! Jody!" each time more results came in, solidifying her position after what was initially a tight three-way race.

"That was a nail-biter, yes?" Wilson-Raybould said after taking the stage.

Campaign volunteers said they weren't surprised it was close.

Jennifer Canas said she heard some hesitation from voters when door knocking during the campaign.

But in Markham-Stouffville, the reality of running as an Independent proved a tougher hill to climb for Philpott.

After a tearful concession speech in which she repeatedly stressed the need for a shift in Canada's political culture, Philpott said she had no regrets about running as an Independent, despite the challenge it posed.

"Partisanship is what Canadians are used to but we showed that there are other ways to do politics," she told reporters as her election party wound down behind her.

"We showed what it's like to be positive and all these good people around me helped us to raise some questions and think about how we can actually do better."

When asked if she had a message for Trudeau, Philpott said: "I wish him the very best and I hope for the very best for Canada under his leadership."

Philpott, who won the seat in the Liberal sweep of 2015, faced a tough battle in seeking re-election despite spending months in the spotlight during the SNC-Lavalin affair.

Throughout the campaign, the former physician touted the benefits of not being tied to a party, but that didn't sway those in her riding, who backed Liberal candidate Helena Jaczek, a former Ontario health minister. Philpott came in third, behind Conservative candidate and local entrepreneur Theodore Anthony.

"I know that Parliament will be lesser without her presence, but I know that Dr. Jane Philpott will go on to continue to do extraordinary things," she said.

Wilson-Raybould won her seat in Vancouver handily for the Liberals in 2015.

She pledged throughout this campaign to do politics differently through a non-partisan approach, a message that was backed by the support of Green Leader Elizabeth May at a rally in September.

Wilson-Raybould became a star candidate for the Liberals in their 2015 bid for power after serving as a B.C. regional chief of the Assembly of First Nations.

Entering the race this time, she had the advantage of a significantly larger profile than her challengers. But her campaign team was challenged with persuading voters that she would be an effective MP as an Independent without the same privileges in the House of Commons as the member of a major party.

Noormohamed tried to seize on that vulnerability in his bid to take the seat for the Liberals, saying in an interview during the campaign that voters in Vancouver Granville should have a voice in government.