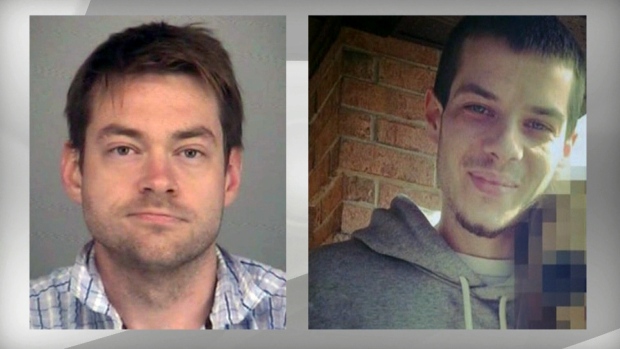 TORONTO -- Jurors deciding the fate of two men accused of murdering Laura Babcock and burning her body were never told that human remains were found in an animal incinerator belonging to one of the accused months after the Toronto woman vanished.

Those remains belonged to a 32-year-old man killed in May 2013 while trying to sell his pickup truck. The incinerator -- called the Eliminator -- was found on Dellen Millard's farm near Waterloo, Ont.

The Crown alleges that about 10 months before Millard and his friend Mark Smich incinerated Tim Bosma's body, they killed 23-year-old Babcock, who had become the odd woman out in a love triangle with Millard and his girlfriend, and burned her remains in the Eliminator.

Jurors in the Babcock murder trial, however, never heard about Bosma, or that Millard and Smich were convicted of first-degree murder in the death of the Ancaster, Ont., man.

Millard, 32, of Toronto, and Mark Smich, 30, of Oakville, Ont., have pleaded not guilty to first-degree murder in the presumed death of Babcock, whose body has not been found.

"It will be very difficult for the jury to objectively and dispassionately weigh the evidence relating to the Babcock case in these circumstances," Code wrote in his ruling.

Crown attorney Jill Cameron argued in court when the jury wasn't present that the Bosma murder was relevant to the Babcock case. She said evidence from that trial would prove that Babcock was in fact murdered and to rebut Millard's claim that she had innocently disappeared. Court heard that Babcock suffered from mental health issues, but was actively seeking treatment, sometimes spoke of suicide and was living a transient lifestyle, bouncing from homes and working as an escort.

Bosma's death, the Crown argued, would also help prove planning and deliberation, as well as refute any possible defence about innocent uses of the incinerator to dispose of animal carcasses or to burn metal and garbage.

The judge said he was partially swayed by the Crown's argument.

"The fact that the two accused used the very same incinerator some ten months later to dispose of Tim Bosma's remains, after he had been murdered, is a distinctive and unusual use of the incinerator, he wrote. "It legitimately helps to infer that Ms. Babcock is likely deceased and that her remains were likely disposed of in the same manner."

However, the judge said the Crown already had significant evidence that Babcock was dead and her remains burned in the incinerator.

Cameron, however, didn't give up.

On the last day of the prosecution's case -- and in the absence of the jury -- she delivered an impassioned argument in a last-ditch effort to convince the judge to allow her to present the facts of Bosma's murder to the jury.

She outlined a few facts for Code: On July 5, 2012, The Eliminator arrived at Millard's aircraft hangar in Waterloo, Ont. His mechanic sent him a photo of the massive machine, which Millard dubbed "the BBQ."

Shortly thereafter, Millard texted Smich: "'The BBQ is the last piece of the 3500 puzzle,' referring to the Dodge truck Millard wanted," Cameron said to the judge.

"What does the incinerator have to do with a theft of a truck if not to burn its owner?" Cameron told the judge.

At this point, Babcock's mother, Linda, broke down and cried softly. Court staff rushed to get her tissues. Babcock's father, Clayton, put his arm around his wife.

Cameron argued that Millard was using the judge's pretrial ruling on the Bosma evidence as a shield. She wanted to rebut Millard's evidence that the incinerator was only used for innocuous purposes.

"Innocent use is a joke, it's a lie," Cameron said.

"It's a difficult thing to conceive for 12 ordinary people that somebody could be so depraved to burn a human being in an incinerator. It's such a leap without the DNA, without the bones, just a poor resolution photo. That's my concern. It's a huge decision to get 12 people to believe that happened."

"I agree, it's quite an extraordinary set of facts," Code replied, but still ruled all the Bosma evidence out.

Earlier in the trial while waiting for the jury to return, the judge brought Bosma's name up unprompted.

"You should tell the Bosmas that the Babcocks will need their support when the jury goes out," Code said to the Crown. "That's important."

Babcock's parents sat in the first row and smiled.