Legal pot in U.S. could cause problems for Canadian travellers 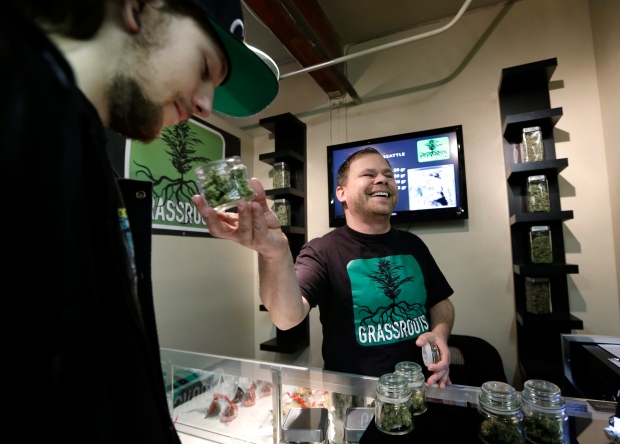 Vendor Jeff Simmons, right, smiles as he holds up a jar of marijuana for Dylan Tracy to sniff during the grand opening of the Seattle location of the Northwest Cannabis Market, for sales of medical marijuana products, Wednesday, Feb. 13, 2013. (AP Photo/Elaine Thompson)

VANCOUVER -- Todd Spaits believes his home state of Washington could one day be the Amsterdam of the United States, with everyone from die-hard pot heads to the curious but uninitiated visiting for the novelty of legally buying and smoking marijuana.

And Spaits, who has already applied for a licence to open a retail store in the Seattle area once the state implements its legalization scheme, hopes Canadians will be among his customers.

"It's going to be similar to an Amsterdam trip: you're just going to go into a shop and look around, and if you do enjoy smoking, you're going to buy something, just to be part of that movement," says Spaits, 39, a self-described "serial entrepreneur" who doesn't smoke pot himself.

"There's going to be a significant chunk of business in that."

When pot sales begin next year in Washington, where citizens voted in 2012 to legalize marijuana, anyone 21 years or older will be able to purchase and possess an ounce of pot, whether they're residents of the state or have come from farther afield. Voters in Colorado and, more recently, Portland, Maine, and several communities in Michigan have also approved varying degrees of legalization.

But legal experts warn anyone heading into the United States planning to indulge in legal marijuana could run into problems if they disclose those plans at the border, with customs officers who enforce federal, not state, laws able to use information about travellers' pot smoking habits to turn them away or even bar them from entering indefinitely.

"What if someone tells the truth at the border about why they're coming shopping? They've now admitted to committing a federal crime, which is purchasing or using a controlled substance, and it's going to create a lot of confusion. Are they supposed to lie? Are they supposed to tell the truth? And how are the officers going to handle it?"

Currently, a non-citizen attempting to enter the United States who admits having consumed illegal drugs -- or committing any other crime involving "moral turpitude" -- can be deemed inadmissible. There are no firm policies dictating when that happens, says Saunders, leaving it up to the discretion of individual border guards.

Once that happens, the designation is permanent, says Saunders, and one of the only ways to get around it is to file an expensive application for a waiver, which must be renewed every few years.

Saunders says his office alone sees one or two such cases each month. In August, a woman from White Rock, B.C., made headlines after she responded to a U.S. border officer's question by admitting she had recently smoked pot. She is now considered inadmissible and Saunders is helping her apply for a travel waiver.

"I'm expecting my business to boom," he says.

When Washington and Colorado first voted to legalize pot, there were immediate questions about whether law enforcement agencies and prosecutors would still attempt to enforce the federal law in those states. Some of those questions were answered in August, when the Obama administration announced it would essentially allow the states to legalize marijuana, as long as strict regulations were in place.

There has been no such assurances from border officials.

Michael Milne, a spokesman for U.S. Customs and Border Protection, a branch of the Department of Homeland Security, says the agency's policies have not changed to accommodate state-level plans to legalize marijuana.

Milne says border guards will still ask some visitors about their marijuana use, which could include questions about whether they plan to purchase or consume legal marijuana if they're travelling to states that allow it.

"The changes in Washington state law have not changed how we process people at the border," he says.

"It's not something that we're asking 100 per cent of the people who come across. If we saw an indication and needed to drill down to make an admissibility decision on a case-by-case basis, that's how we do it."

Scott Railton, an immigration lawyer whose office is based in Bellingham, Wash., agrees visitors hoping to smoke legal marijuana could run into trouble if they tell border officers why they're travelling to the United States.

Railton says the safest option for Canadians is to simply forget about trying out legal marijuana in jurisdictions such as Washington.

"Until the Department of Homeland Security offers direct guidance to say this is OK, it's very conceivable for me that a person could encounter admissibility issues," says Railton.

"So, that being true, right now I would advise them not to use marijuana under Washington's rules. There are just a lot of unanswered questions."

The legalization in Washington and Colorado is unlikely to have a similar effect for travellers coming into Canada, whether they are Canadians returning home or American residents.

The Canada Border Services Agency says its officers don't routinely ask travellers about illicit drug use, and simply admitting to having used marijuana isn't grounds for inadmissibility on its own.

Still, agency spokeswoman Faith St. John says if officers believe travellers have been in contact with drugs, that may prompt additional scrutiny to ensure they aren't carrying drugs or aren't driving while high.

"People should be aware that even if they have purchased marijuana legally in Washington state, it is still a crime to transport it across the border," St. John says in a written statement.

"Anyone using marijuana legally in Washington state should ensure that they are not under the influence when driving across the border into Canada."

Vancouver pot activist Jodie Emery says Canadians might assume, incorrectly, that there is nothing wrong with telling American border guards about their plans to smoke pot in the U.S. if they're heading to a state where it's legal.

"It definitely presents a problem that needs to be addressed."