The man accused of using extortion to try and retrieve a video of mayor Rob Ford in a compromising situation was granted bail Friday morning.

Alexander “Sandro” Lisi was granted a $5,000 no-deposit bail and will be released into the custody of his father.

Both of his lawyers briefly spoke to reporters outside the courthouse about why they sought a publication ban.

"I know it's not necessarily what you want to hear, but we're not in a position to comment on the matter," said Domenic Basile. "All I can tell you is there's a condition he can't associate with anyone who has a criminal record."

The lawyers also asked media to respect the privacy of the suspect and his family.

"It's been very difficult for him," said lawyer Seth Weinstein. "He's been living under a spotlight that is extraordinary and that quite frankly, I've never seen before and it's obviously very difficult."

The extortion charge against Lisi was laid in connection with a cellphone video that allegedly shows the mayor smoking from a glass pipe. Police claim Lisi made "extortive efforts to retrieve a recording."

After Lisi was arrested Thursday, Toronto police Chief Bill Blair made a stunning revelation at a news conference, where he told reporters his officers have recovered a video of the mayor that is consistent with allegations described in recent media reports.

Back in May, reporters with the Toronto Star and Gawker said they had been approached by two men who wanted to sell a video of the mayor for a six-figure sum.

The three reporters said they had viewed a cellphone video which appeared to show the mayor smoking from what looked like a crack pipe. The media outlets did not purchase the video and the images have never publicly surfaced.

However, on Thursday, Toronto Police Chief Bill Blair said officers discovered the video Tuesday when forensic investigators managed to recover two deleted files from a hard drive that was seized during Project Traveller raids on June 13.

Two people arrested during Project Traveller were identified as Liban Siyad and Mohamed Siad. Both men are listed as victims under Lisi’s extorition charge.

The court documents say, that Lisi, sometime between and including May 16th and May 18th of 2013, "without reasonable justification or excuse and with intent to obtain a digital video recording, did induce Mohamed Siad or Liban Siyad by threats or violence or menaces to deliver said digital video recording to Alexander Lisi."

The video, allegedly recorded at a Windsor Road home identified by police as a known “crack house,” has not been seen by the public.

Blair said there are no reasonable grounds to charge Ford based on the video’s contents. He said the investigation continues and additional charges may be laid.

Ford has repeatedly said he does not use crack cocaine and he has denied the video's existence.

On Thursday, Ford said he has no reason to resign and he declined to respond to Blair’s claims or an unsealed court document that reveals many unusual or suspicious meetings he had with Lisi.

For several weeks, officers watched the meetings and other activity involving Lisi as part of an investigation into the video.

The probe called Project Brazen 2 – an offshoot of the Project Traveller wiretap investigation that targeted two gangs – is being handled by senior homicide detectives and it began two days after the video was first described by the online gossip website Gawker and the Toronto Star on May 16.

Police used officers on the ground, a noisy aircraft that drew several complaints from Etobicoke residents, and a secret camera outside Lisi's home to conduct surveillance on him, Ford and others. An alleged drug deal with an undercover officer led to Lisi, 35, and Toronto businessman Jamshid Bahrami, 47, being arrested at Bahrami’s dry-cleaning shop a month ago and charged with drug offences.

It is not known if the surveillance project is ongoing because the court document provides details about the investigation up to the Oct. 1 arrests.

Evidence within the document was used to secure search warrants and none of the allegations have been tested or proven in court.

The 474-page document describes encounters between Ford and Lisi at locations including a soccer pitch, gas station, their homes, a wooded area and parking lots.

Officers watched Lisi place a white plastic bag in Ford’s Cadillac Escalade as the mayor watched a soccer game, and on another occasion they watched the mayor urinate in public as he met with Lisi behind a school. After that meeting and at least one other, police found empty liquor bottles.

Some evidence is still a mystery. The document was heavily redacted because an Ontario Superior Court judge ruled only some of the information could be released.

Media lawyers are returning to court to argue for the rest of the document to be made public.

Meanwhile, Lisi is expected in court next on Dec. 6. 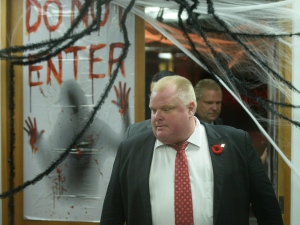 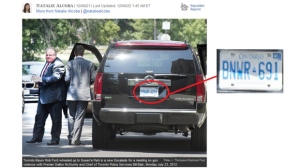 Photographs from the police investigation 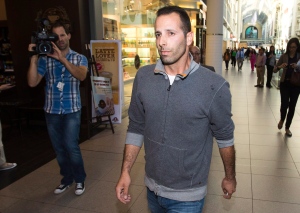 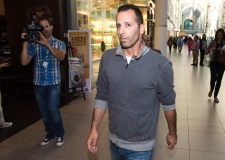 Toronto Mayor Rob Ford's occasional driver Alexander Lisi, centre, walks through the Eaton Centre shopping mall as he is chased by reporters after he left the courtroom after being granted bail on drug charges in Toronto on Wednesday, Oct. 2, 2013. (The Canadian Press/Mark Blinch)