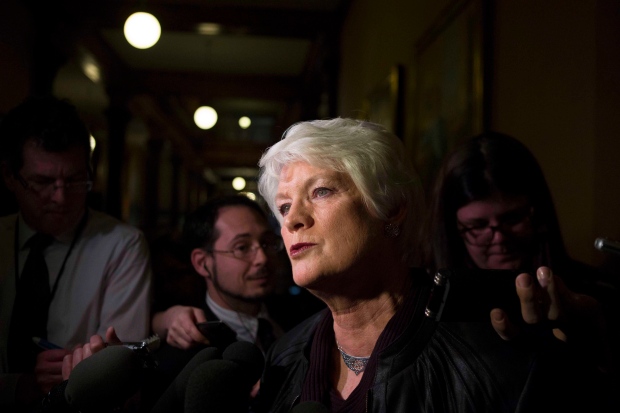 Ontario Education Minister Liz Sandals scrums with the press at the Ontario Legislature in Toronto on Wednesday, Feb. 13, 2013 . (The Canadian Press/Chris Young)

TORONTO -- Ontario's education minister is surprised by some of the criticism over the province's proposed changes to the sex ed curriculum, saying the concept of consent is already taught to primary school children.

"I've been quite taken aback by things that people are trying to label as sex ed," Liz Sandals said Wednesday.

"Now, I had just considered that basic anatomy," Sandals said. "Some people seem to talk about sex ed. So I guess the current curriculum starts sex ed in Grade 1 if you think basic anatomy is sex ed."

Premier Kathleen Wynne said earlier this week that Ontario students should start learning facial cues as early as Grade 1 to give them the ability to understand the concept of consent.

Wynne had just met with two Grade 8 girls from Toronto who launched a petition to have consent included in the sex ed curriculum, which the province is in the process of revamping. What the experts recommend will be published online this winter, Sandals said.

The girls say the curriculum must be about more than just teaching students to ask for consent, and should teach kids how to understand body language, facial expressions and how "the lack of 'No' isn't necessarily a 'Yes."'

Christian evangelist Charles McVety is sounding the alarm through his Institute for Canadian Values, suggesting Ontario's teachers will be instructing young children on how to consent to sexual activity.

"On one hand we applaud the premier for introducing sex education that would teach children how to say no, but on the other hand at their press conference they said that abstinence was unrealistic in this day and age, therefore they were going to teach children starting in Grade 1 how to give consent," McVety said.

"So in that context the only conclusion you can come to is that they are...planning to introduce sexual consent to six year olds. That is intolerable for parents."

Ontario students are always taught in an age-appropriate manner and when it comes to consent, situations such as saying no to going somewhere with a stranger or saying no if someone's touch makes them uncomfortable, are already taught at the primary level, Sandals said.

She also said that conversations with older children around sexual consent need to start with a foundation of empathy.

"If you're going to talk later on then, as the kids get older, about issues like safe Internet use, responsible relationships, respectful relationships -- all those things are built on empathy for the other person that you're dealing with," she said.

McVety and other religious leaders condemned the Liberals for going too far with the proposed changes four years ago, forcing the government to back down until now.