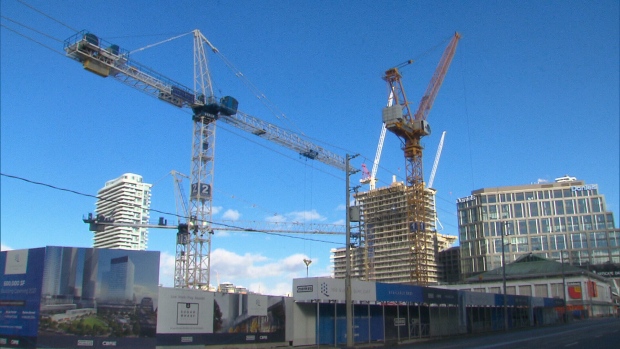 Provincial changes to the city’s development plans for the downtown core and midtown will “enable taller buildings” than previously permitted while reducing other requirements on developers, according to a memo written by Chief Planner Gregg Lintern.

The five-page memo, which was sent to members of council on Thursday, outlines some of the changes affecting the TOcore plan and the Yonge-Eglinton Secondary Plan.

The memo states that the changes will, in general, eliminate provisions “introduced to ensure development does not outpace infrastructure” while also “allowing increased intensification.”

In total, Lintern says that there were 194 modifications made to the Yonge-Eglinton Secondary Plan and 224 to the TOcore plan, all of which are “not subject to appeal.”

He said that the modifications mostly result in “less policy direction and more policy guidance” by replacing strong language with “more permissive wording such as ‘may,’ ‘generally’ and ‘encourage.’

It says that the city’s downtown plan required that building be setback at last six metres to allow for wider sidewalks but that provision has now been deleted.

The city’s plan also identified 44 parks and open spaces that were protected from additional shadows cast by new buildings but the memo points out that developers will now only be required to “adequately limit net-new shadows."

The changes also eliminate or reduce requirements for non-residential uses in the Financial District and Health Sciences District that Lintern says were put in place to “ensure there was sufficient space to accommodate long-term employment growth and support the expansion of healthcare and other institutions.”

For example, in the King Street and Spadina Avenue and King Street and Parliament Street areas a minimum of 25 per cent of the area of new buildings was required to be for non-residential uses but that requirement has now been replaced with a policy that simply encourages the replacement of existing non-residential space as part of any redevelopment.

“Every single unilateral change imposed by the province on our downtown is transparently about one thing – more money for a few condo developers. Full stop. It has nothing to do with livability, long-term prosperity, or affordability,” Coun. Joe Cressy, who represents a downtown ward, said in a message posted to Twitter on Thursday night. “We spent seven years developing a 25 year plan for downtown to ensure that it remains liveable as it grows. Downtown has the fastest growing neighbourhoods in North America with a population projected to double to 500,000 over the next 25 years. The notion this is about supply is BS.”

Lintern said that the main purpose behind the TOcore plan “was to link the provision of infrastructure to growth and the increase in residents and jobs.”

He said that the changes, however, remove that direct link by “deleting or amending policies” that made it clear.

For example, one section of the plan requiring that the provision of infrastructure “be commensurate with the intensity of development and the number of residents and workers generated" was deleted entirely while another section stating that growth be accompanied by the community service facilities required to support complete communities was altered to say that the provision of those facilities will be “encouraged to support complete communities.”

Speaking with CP24 about the changes on Friday, Mayor John Tory said that he is “very, very unhappy” that they were introduced without consultation and is concerned about the years of planning work that they largely negate.

He said that while he has a “degree of optimism” over the province’s willingness to discuss forthcoming regulations that will be enacted alongside the changes, he is concerned about the city’s ability to pay for important community infrastructure.

“Maybe now there will be a degree of good faith about this coming from the province. I will start from that assumption and see where it goes from there,” he said. “I am hopeful that they will produce a formula that will give us the money we need to build a great city to accompany the development that they have now instructed us that we should have.”

Other changes outlined in the memo include: