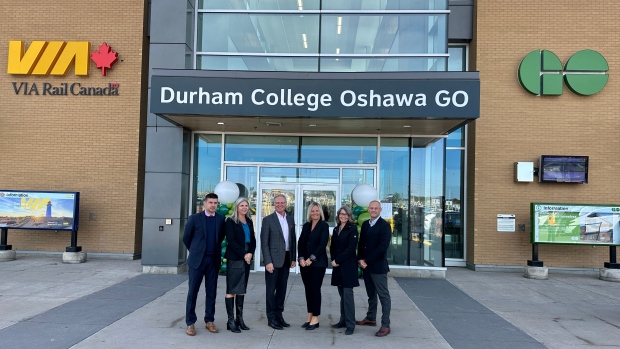 The deal is the first of its kind in the province and it comes three years after the Ford government announced it would consider selling naming rights for GO stations.

The new name has already been added to the main entrance of the station and all physical signage is expected to be updated in the coming weeks.

“We’re always exploring how partnerships like this can play a role in improving and expanding GO Transit services and enhancing the overall customer experience,” Metrolinx told CP24 on Tuesday.

Metrolinx also said they couldn’t disclose the cost of the naming rights deal because any payment information is “commercially sensitive.”

In 2019, the provincial government estimated that Metrolinx could make between $50,000 to $500,000 a year on naming rights for some stations.

“By partnering with Metrolinx, Durham College is strengthening its relationship with future students, employees and partners in the community, a priority for the college as it continues to fulfill its 2020-2025 Strategic Plan,” announced the college in a news release.

“This unique marketing opportunity also helps Durham College position itself in the community and surrounding areas as a leader in education, collaboration, inclusivity and innovation.”

When the program was first proposed, it was reported that any naming rights deal would provide sponsors with ridership data, however Transportation Minister Caroline Mulroney said at the time that it would be stripped of any personally identifying information.

“All data collected to develop ridership analytics is aggregated and non-identifiable and does not contain individualized or personal information that can be tied to an actual person,” said a Metrolinx spokesperson in a 2019 statement.

The provincial government said in 2019 that it was initially seeking interest in the naming rights for five other GO Transit stations - Whitby, Pickering, Exhibition, Clarkson and Oakville.