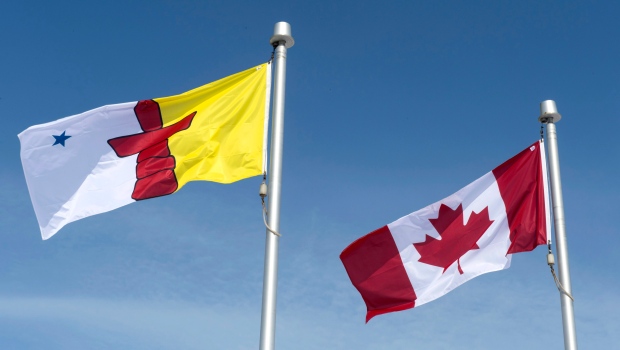 The Nunavut flag and the Canadian flag are seen Saturday, April 25, 2015 in Iqaluit, Nunavut. THE CANADIAN PRESS/Paul Chiasson

IQALUIT, Nunavut -- First, someone using a government of Nunavut computer clicked on a link they shouldn't have.

Next, there was a message saying: "If you want your data back, then please contact us this way."

Then, at about 4 a.m. Saturday, the government's entire computer system went dark. The ransomware attack encrypted individual files on various servers and workstations, and locked out regular users.

It remained dark as of Monday, with no prospect of immediate resurrection.

Government offices remained open, but were forced to operate in a way not seen in years.

Fax machines, long silent, were chattering again. People were picking up the telephone instead of sending emails.

"It's going back quite a few years," Savikataaq said. "We have no ability to make payments. If worse comes to worst, we'll be writing manual cheques."

Wells said there was no problem with the territory's cyber security. It had recently been updated and upgraded. It withstands thousands of attacks daily, he said.

"It was not like it was neglected. We were well prepared."

An investigation is trying to figure out how the attack was able to infiltrate Nunavut's system so completely and do so much damage.

Meanwhile, Nunavummiut are being warned that services will take longer than normal. Those attending medical appointments have been asked to bring their health cards and any medication they're taking.

The government had contingency plans and they are working well, Savikataaq said.

Wells said the databanks are being rebuilt from backup files.

Personal information doesn't appear to have been leaked in the attack, the territory said. Rather than distributing private data, ransomware attacks prevent users from getting their information and demand a ransom to restore access.

Wells said no payment will be made.

"People are working around the clock," said Savikataaq. "It's not business as usual, but we're still functioning with near-normal capacity."