An off-duty firefighter says he was glad to be in the right place at the right time when he came to the rescue of a man who was trying to escape a burning Cabbagetown home Wednesday morning.

The fire broke out at a house at 222 Carlton Street, near Berkley Street, at around 10:30 a.m. and flames were seen coming from the third floor of the building.

Off-duty firefighter Dave Archer, who was teaching a first aid course two doors down, told CP24 that he smelled smoke and went out to see what was happening.

He then spotted a man dangling out of a window on the third floor of the building about 30 feet up.

"He was ready to jump or fall because he was losing his grip strength," Archer said.

At that point, the Toronto firefighter jumped into action and ran into the burning building. When he got to the third floor, he said he saw the man through the smoke.

"I was able to grab him out of the window and get him down the stairs in time," he said.

The man, Archer said, was treated by paramedics for minor burns to his arm and finger but has since been released.

At the height of the fire, which is believed to have started in the attic, 12 trucks and 45 firefighters were on scene battling the two-alarm blaze, Toronto Fire Capt. Mike Strapko said.

Toronto Paramedic Services said there were no other injuries reported. 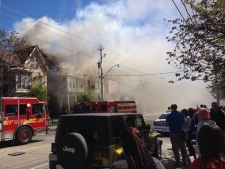 Carlton Street is closed between Parliament and Sherbourne streets for a fire, Toronto police say (Twitter/@KailahBharath)