The marquee pledge in the Ontario government’s first balanced budget in nine years is a free prescription drug plan for anyone under the age of 25.

It will provide free medication with no co-pay or deductible to all children and young adults – regardless of their household income - at a cost of $465 million per year.

The plan, dubbed “OHIP+” by officials, will include all 4,400 medications covered through the province’s existing Ontario Drug Benefit program. This includes inhalers, EPI pens and birth control.

There are approximately four million Ontario residents under the age of 25 who will benefit from the drug plan, which begins on Jan. 1, 2018.

Finance Minister Charles Sousa told reporters Thursday that the pharmacare plan will be the first of its kind in Canada, and should spur other provinces and the federal government to introduce “something more nationally,” like a universal plan.

“We are encouraging the federal government to look at it with a wider scope.”

The existing Ontario Drug Benefit is used by 2.3 million seniors and 900,000 people on some form of social assistance.

Sousa said the taxation powers will include the ability for cities to tax house sharing applications such as AirBNB.

Even with the new spending, Finance Minister Charles Sousa says the budget is projected to stay balanced for the next three years.

The government was able to close the gap and achieve balance largely due to increased corporate income and personal income tax revenue, and land transfer tax revenue from the GTA’s still-booming housing market.

This budget – the fifth for Kathleen Wynne ­– keeps a promise she made during the 2014 general election to reach balance no later than 2017-18, and is a complete climb-down from the annual deficits that once reached more than $19 billion in 2009 in the wake of the global financial crisis.

“We’ve exceeded our (fiscal) targets and we’ve built prudence into the system, but we’ve also made some choices,” Sousa said. “Pharmacare for our kids, money for hospitals and seniors, more money for students.”

Total spending for the year is $141 billion, with $11.6 billion going towards interest payments on the debt.

The province’s net debt will reach $312 billion this year.

Ontario PC leader Patrick Brown called the budget a “Hail Mary pass by a government that has run the province into the ground for years.”

“Ontario will continue to be the most indebted province or state in the world.”

He contended that the Liberals have only achieved a balanced budget this year through the use of one-time windfalls such as the sale of cap-and-trade carbon credits, accounting for one-time federal transfers and the sale of crown assets such as shares in Hydro One or the Ontario Power Generation headquarters building in downtown Toronto.

Together, Brown says that without these one-time items the Liberals would still be in deficit.

“It is a shell game they are using to hide a $5 billion operational deficit.”

Ontario NDP leader Andrea Horwath, who if elected premier promised to implement a universal drug plan of her own – for people of all ages – last week, expressed surprise at the Liberals central pledge in the budget.

“All I can think of is that they made it up on the back of a napkin just before today,” Horwath said, remarking at the fact that the cost of the Liberals’ plan is not written anywhere in the 290+ page budget document.

“If I am a young person, this plan might impact me but it won’t impact my parents,” Horwath said of the Liberal plan.

Horwath’s drug coverage plan would start by covering 125 of the most-prescribed drugs, and scale up gradually.

“Our plan is the smartest plan and the one recommended by experts,” Horwath said Thursday.

The 2017 budget includes $7 billion in new money for the healthcare sector. Apart from the new pharmacare plan, $1.3 billion will be spent to expand emergency rooms throughout the province and lower wait times.

“The last flu season was tough and there were a lot of demands on our system,” Sousa said, referring to overcrowding in many GTA-area emergency rooms over the past five months.

There is also new money for physiotherapy and home care, mental health services, dementia patients and construction projects, including 34 hospital sites across Ontario.

“We’re trying to provide women with a choice and with a safe choice, and that’s it,” Sousa said.

PC leader Brown said he would not oppose the funding of the abortion pill, as medication approvals should “let the scientists decide, not the politicians.”

The health and long term care budget for 2017 is $53.8 billion, representing 38 per cent of the total provincial budget.

Cities to get new taxation powers

Municipalities will now receive the power to tax vacant residential property and levy a new tax on hotel rooms ­– something Toronto Mayor John Tory has asked for repeatedly.

Sousa said the housing market is projected to continue rising, even in the face of new housing measures announced last week, but that the province has set its expectations for growth below economists’ projections.

Money from the newly-announced 15 per cent Non-Resident Speculator Tax will be counted as part of Land Transfer Tax revenue, but officials say its impact on revenue will be negligible.

As the province’s economic growth has picked up in recent months, the budget will be balanced without painful tax increases one year from a general election.

Starting at midnight, the cost of a carton goes up $2 and will go up again by $4 next year and the year after that.

Officials say 17 per cent of Ontarians still smoke, and the increase reflects a five-cent increase in the cost of a single cigarette.

Last year, the province raise the price of a cigarette carton by $3.

Where is the cap and trade money going?

If you’ve been to a gasoline pump or paid a natural gas bill this year, you’ve noticed an increase in the price of fuel. Part of this is due to the province’s new cap and trade carbon pricing scheme.

The government will also introduce a public transit tax credit for seniors – largely replacing the federal universal transit credit to be phased out by July 1 ­­– that could save a senior as much as $130 per year.

The move is expected to cost taxpayers $10 million per year over the next three years. 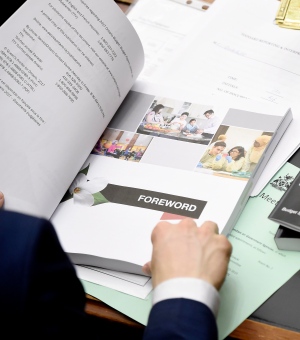