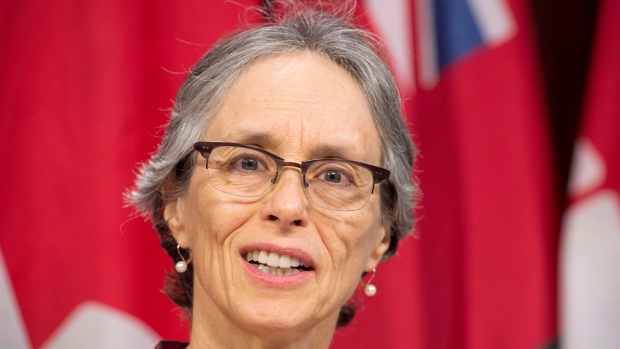 Dianne Saxe, Environmental Commissioner of Ontario releases her annual environmental protection report during a news conference at the Ontario Legislature in Toronto on Tuesday, November 13, 2018. THE CANADIAN PRESS/Frank Gunn

Dianne Saxe, whose job was eliminated by the government earlier this year, told the crowd gathered outside the provincial legislature that Ontario had a good record on climate change action until Doug Ford's government was elected last year.

In her former role, Saxe reported on the province's environmental programs and acted as a watchdog on government policy. Earlier this year, her office was folded into Ontario's auditor general office by the Tory government.

Saxe's comments were some of her most pointed public remarks about the Ford government since she her job was cut. She chided the Tories for eliminating the previous Liberal government's cap-and-trade climate change plan and for spending $30 million to fight the federal carbon price in court.

Saxe urged people at the rally to vote for federal parties which support a federal carbon price.

“Carbon pricing is the best tool ... it's not enough, but it's indispensable,” she said. “We had it in Ontario. We could bring it back. Or at least we could stop fighting the federal one.”

Neither Premier Doug Ford nor Environment Minister Jeff Yurek was at the event Friday, and Saxe said they should have attended.

“The reason no one from the Ford government is here, I think, is that their record is abominable,” she said. “Almost every piece of leadership we had here they have broken. They have a weak plan and they're not doing anything to implement it. They're really an international embarrassment.”

Yurek's office issued a statement before the climate rally touting the province's environmental record over the past decade - the Liberals were in power for nine of those years. The Tory government is pressing ahead with a plan to ensure large industrial emitters are “accountable” for pollution they produce, he said in a statement.

“Our government's plan is proof that we can balance a healthy environment with a healthy economy,” Yurek said. “We are committed to taking meaningful action on climate change by implementing effective and affordable measures to reduce our province's emissions and support Ontarians as they look to do their share in helping to protect and preserve the environment.”

At the rally thousands of participants jammed the front lawn of Queen's Park and the nearby streets holding placards, chanting and demanding action on climate change.

Matteas Berger, 17, said he came to the rally to send a message to all governments.

“On top of all the education cuts that are currently going on I think (Premier Ford) is focusing on his primary objectives rather than taking a larger perspective,” he said. “He needs to focus on the future generations. He's not doing a very good job of it.”

Jack Murphy said he came to the rally with his two sons and his dog Truc to protest what he described as the Ford government's lack of action on climate change.

“We have Mr. Ford who is dragging us further backwards,” she said. “These folks are here to say that's the wrong direction and they're here to push leaders to take strong actions to get greenhouse gas emissions down.”

Green party Leader Mike Schreiner said he was inspired by the crowd. He sent an open letter to Ford on Friday asking him to act on climate change.

“I asked him to listen to these young leaders and act on the climate crisis instead of wasting our tax dollars sabotaging climate solutions,” he said.