Ontario is facing a “substantial” fourth wave of the COVID-19 pandemic and could see daily case counts reach 9,000 by October in a worst-case scenario, according to new modelling.

The modelling, which was prepared by Ontario’s Science Advisory Table, suggests that case counts could rise exponentially in the fall if Ontarians do not reduce their contacts.

In the worst case scenario, which assumes an increase in contacts as students return to the classroom and some workers go back to the office, case counts would top 9,000 by Oct. 1 and continue rising.

But in a more optimistic scenario, based on a 30 per cent reduction in contacts, case counts could begin declining within days and dip under 500 by October.

The current trajectory with no real change in contacts would see daily case counts reach about 4,000 by October, exceeding the peak reached during the height of wave three in the spring.

Ontario has never seen case counts match up with the worst-case scenarios presented in provincial modelling.

“Our models, federal models, and models in other jurisdictions predict a substantial fourth wave,” a presentation accompanying the latest projections warns. “The fourth wave will affect all age groups with the potential to exceed ICU capacity.” 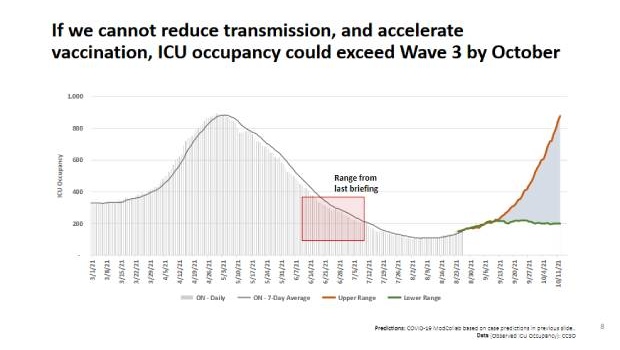 The latest data was quietly posted to its website late on Wednesday afternoon after Premier Doug Ford held a press conference to announce a new vaccine certificate system.

There was, however, no press conference held to explain the projections as has previously been the case.

The science table's director of communications said, "We knew people wanted to see the modelling as soon as it was ready and as soon as the government had seen it, and this was the easiest and fastest way to get it out without having to organize a [news conference] right after a hiatus."

The modelling paints an alarming picture for the fall, suggesting that because of the Delta variant and the high number of Ontarians that remain unvaccinated there is likely to be a “rapid increase in the number of seriously ill people needing hospital care as workplaces and education re-open in September.”

In fact, it says that the number of COVID-19 patients in the ICU could exceed the wave three peak (900) by October in a worst-case scenario. Back then hospitals had to cancel elective procedures and some patients in Toronto hospitals were being airlifted as far away as Kingston in a desperate bid to free up capacity.

The good news is that the latest modelling does suggest that the worst-case scenario for Ontario hospitals can be averted if residents reduce their contacts to 70 per cent of pre-pandemic levels and vaccination rates continue to improve.

In that scenario it says it is likely that the number of COVID patients in intensive care will continue to hover around 200 for the foreseeable future.

When asked whether Ontario is headed to another lockdown this fall, the scientific director of the science table believes it is possible to avoid that scenario.

"The vaccines have helped us tremendously. But in addition to that, we need to get a little bit better than what we're doing right now in terms of restrictions. And that's also where vaccine certificates come in now," Dr. Peter Jüni told CP24 Wednesday evening.

So far, he said the province has done the right by staying in Step 3 of its reopening framework.

"If we continue to do the right thing and use vaccine certificates smartly, this will go in absolutely the right direction," he said.

The forecasters are also recommending that large gatherings be limited and that work from home arrangements continue in order to further reduce contacts.

“I will say that this doesn’t really surprise me and I would think that those who’ve been listening and hearing what we’ve been saying in terms of public health advice won’t be particularly surprised either,” Toronto’s Medical Officer of Health Dr. Eileen de Villa told CP24 shortly after the release of the modelling.

“They are talking about the need for greater uptake of a vaccine and for reduced interaction and we have said all along when it comes to COVID-19 the more people interact with each other, the more they socialize, the more likelihood you have of transmission and this is particularly the case where you have unvaccinated people.”

Ontario has seen its rolling seven-day average of new cases increase by a staggering 270 per cent over the last month.

The modellers do note that they “do not expect to see the same proportion of severely ill cases in the vaccinated” but they said that in order to truly protect the healthcare system there will need to be a “substantial acceleration” in the number of Ontarians with two shots.

In a statement following the release of the modelling, a spokesperson for Minister of Health Christine Elliott said that the Ford government believes that Ontario is “is currently trending between the projected medium and best-case scenario” and expects today’s announcement about a vaccine certificate system to “further improve” its trajectory.

The spokesperson called Ontario’s reopening “the most cautious” in the country,” something that she said has resulted in lower case counts on a per capita basis when compared to British Columbia and Alberta.

But the modellers, in their presentation, do warn that vaccination alone won’t be enough to protect the population especially in the face of a Delta variant which they say has a reproductive number between six and eight without public health measures.