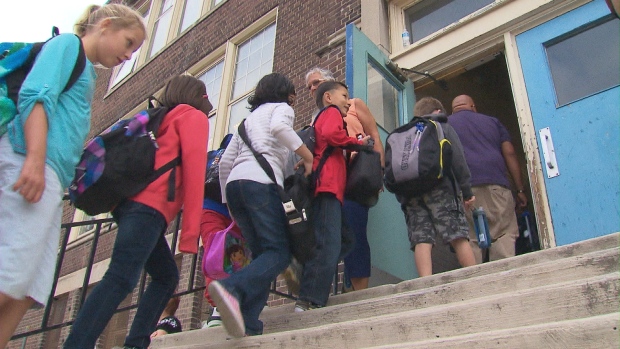 Children enter a school in this file photo.

Public elementary school teachers across Ontario are ramping up their job action today by withdrawing from all voluntary extra-curricular activities.

The Elementary Teachers’ Federation of Ontario, the union representing elementary school teachers in the province, launched ‘Phase 3,’ of the job action in late September, telling its members not to fill in for absent teachers, take on extra duties during scheduled prep time, or update classroom websites, blogs and newsletters.

According to the union, the decision to escalate the work-to-rule campaign was prompted by the province and the Ontario Public School Boards’ Association’s refusal to return to the central bargaining table.

John Smith, president of Elementary Teachers of Toronto, told CP24 Wednesday that negotiations were going well up until a couple of weeks ago.

“OPSBA and the ministry went public with what was being talked about, which is something we’d agreed not to do and that caused the negotiations to go off the rails,” he said.

“And to pressure bringing them back to the negotiations table, ETFO announced that it was going to cancel all extra-curricular activity. That has had the effect of bringing everybody back to the table and they have been talking since Saturday.”

Meanwhile, Premier Kathleen Wynne has said that come Nov. 1, teachers and some support staff will be docked pay if the work-to-rule campaigns don’t end.