Ontario wants deal with feds on national childcare plan but no timeline as of yet: Ford 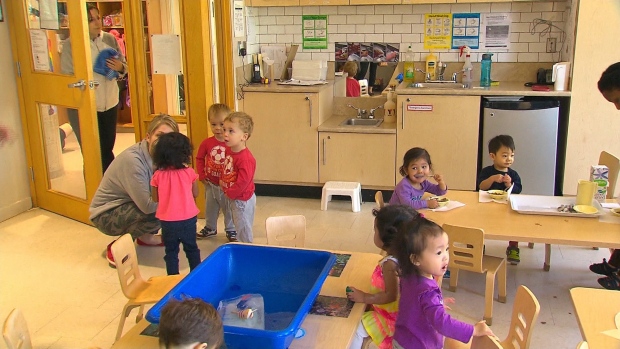 Premier Doug Ford says that he wants to reach a deal with the federal government on reducing the cost of child care in the province but he is cautioning that it has to be the “right deal” and is not offering up any timeline for when parents could see some cost relief.

A new $30 billion national child-care plan announced by the Liberal government in April promises to cut fees for non-profit child-care providers in half by next year and then lower them further to $10 a day by 2026.

Ontario, however, is one of three provinces that it yet to sign a formal agreement with the feds. The others are Alberta and New Brunswick.

During a press conference on Wednesday, Ford said that there have been some “great conversations” with the federal government but he did not indicate whether a deal would be forthcoming now that the Liberal government has been re-elected.

He also did not elaborate on what the stumbling blocks are.

“We want a deal but we want to make sure we have the right deal for Ontario,” he said. “There is a lot of people in Ontario that supported the Prime Minister and make no mistake about it I'm going to be right on the front lines of making sure that all those promises he's committed to, he fulfills them.”

Toronto is the most expensive city in Canada for child care with parents paying an average of $1,600 in monthly fees per child.

That means that many parents of younger children in the city and its surrounding suburbs would be in line to save hundreds of dollars a month if Ontario signs onto the program.

“I'm going to work with them collaboratively and in a good way, not a bad way but a good way,” Ford said of the new Liberal minority government on Wednesday. “My number one priority over anything is protecting the people of Ontario, making sure that their interest comes first.”

While Ford did not provide specific details about the discussions with the feds, Ontario Minister of Education Stephen Lecce did say last month that the province wanted its existing full-day kindergarten program reflected in any final agreement on child care.

He also said that the government wanted the final agreement to “achieve the imperative of affordability and accessibility, while also ensuring an element of flexibility.”