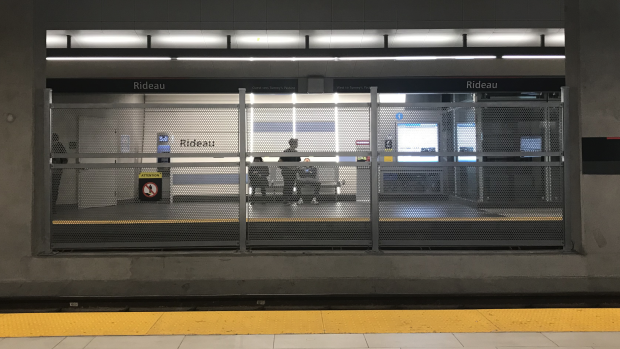 Passengers wait on the Rideau Station platform for an OTrain along the Confederation Line of Ottawa's LRT system. (CTV Ottawa)

OTTAWA -- Riders on Ottawa's problem-plagued light-rail system are having another rough morning, with the city's transit agency saying only eight the usual 13 trains on the downtown line started daily service.

The city is blaming the company it hired to design, build and maintain the line, which opened last fall.

Since then, the $2.1-billion system has been repeatedly brought to a halt by problems with stuck doors on trains as well as onboard computers that have failed.

Trains have also been taken out of service because the wheels, apparently, have flat spots.

And just in the last week, parts of the line have been shut down by a snapped power cable and switches that didn't work in a weekend snowstorm.

The city's transit agency, OC Transpo, apologized to riders for trains and platforms that were extra crowded, as well as longer-than-usual waits because an array of separate problems that kept more than half of its 17 trains off the tracks during the morning commute.

The system will be two trains short during mid-day service, OC Transpo said, with only nine trains running of the usual 11 during the lull between rush hours, and wait times upped by a minute.

Ottawa's transit manager, John Maconi, said in a statement Monday afternoon that the city is pressuring the private company that maintains the system to "get the job done" and "live up to the standards expected by our transit customers."

OC Transpo said it is billing the maintenance company for replacement buses, but there aren't enough of those to keep up with the need.

The chair of the city's transit commission told two morning talk shows that the company, Rideau Transit Maintenance, has had problems completing maintenance work on the wheels.

Coun. Allan Hubley said in separate interviews aired Tuesday morning that the wheels have developed flat spots and need to be taken out of service.

The company has a 30-year maintenance contract with the city.

Sarah Wright-Gilbert, a citizen member of the transit commission, lamented on Twitter that OC Transpo and Rideau Transit Maintenance "need to step up their game," writing "the trains lose power because they are dirty" and now "the trains break down because their wheels are no longer round."

"If RTM isn't performing their contractual obligations, then it's time for them to go," she tweeted.